September 25, 1986: Mike Scott Clinches a Division Title With a No-No 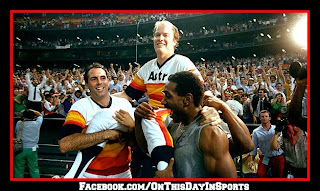 On September 25, 1986, Astros hurler Mike Scott pulled off s double dose of history when he no-hit the San Francisco Giants in a 2-0 win in front of more than 32,000 at the Astrodome in Houston. Scott's no-no also clinched the National League West Title for the Astros. It was the first time in the history of the game that a no-hitter had been tossed in a clincher. The 31 year old righty had a filthy splitter working for him which ironically he learned from the manager of the Giants, Roger Craig. The Giants skipper realized by the fourth or fifth inning that there was a very real possibility that Scott was going to achieve the no-hitter and he called it one of the most dominating performances he had ever seen. Scott needed just 102 pitches to complete the no-hitter. He began the game by hitting Dan Gladden then made quick work out of the next three men he faced. The second inning started with a walk of Chili Davis then Scott retired the next 19 men in a row before giving up a eighth inning walk to Phil Ouellette. The final out of the ballgame was a soft grounder off the bat of Will Clark that completed the no-no. The dominant performance by Scott only had three balls make it out of the infield as he struck out 13 men on his way to putting himself in the history books. The victory moved Scott to 18-10 and locked down a Cy Young award for the hurler who finished that season with 306 K's. When interviewed after the game Scott said "I'm numb, I'm tired, but this is fantastic," he went onto say "Right now, I hope I don't fall down and pass out." The crowd in the Astrodome was so electrified by the historic performance that they sat in the stands for more than a half hour after the game ended chanting "We want Scott!!!" Finally the pitcher appeared, to the delight of the crowd his teammates carried him onto the field as they cheered on the man who turned in one of the best performances in the history of a clincher. The Astros went on to meet the New York Mets in the NLCS. Despite two outstanding performances by Scott in that series they ended up losing in 6 games to the team that would go onto win the World Series. While the season didn't have the storybook ending that Scott and his teammates would have hoped for it was a season that had many great moments including a no-no that clinched them a division title.

Check out the box score: http://www.baseball-reference.com/boxes/HOU/HOU198609250.shtml
Posted by Wade Forrester at 12:38 AM