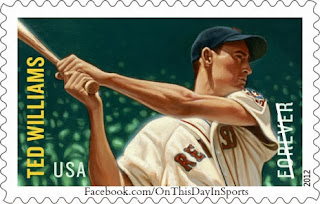 On September 28, 1941, Ted Williams of the Boston Red Sox refused to sit out of a doubleheader at Shibe Park in Philadelphia as he was sitting on a batting average of .39955 and his manager Joe Cronin offered to let him ride the pine so he could maintain the rounded up .400 average. The 23 year old Williams said "I don't want to be known as a .400 hitter with a lousy average of .39955." Williams came out and put on a show at the plate as he went 6 for 8 and brought that lousy average up to .406. In the first game "The Splendid Splinter" went 4 for 5 as his club battled their way to a 12-11 victory over the hometown A's. Three of those four hits were singles, the fourth was his 37th home run of the season which was good for the league lead. After the first game Williams had brought his average up to .403 but that didn't keep him from taking the field in an effort to preserve it, he wanted to add to the total and that's exactly what he did. He went 2 for 3 with a double in the 7-1 win that  brought his average up to .406 as he completed one of the most sensational seasons any batter has ever seen. In that '41 season, Williams played in 143 ballgames, he picked up 185 hits in 456 plate appearances, which included 151 walks, he knocked in 120 runs while scoring 135 of them himself. One of the most astounding stats besides hitting .400 of course is the fact that he only struck out 26 times during that campaign. Williams was the first person to hit .400 since Bill Terry of the New York Giants hit .401 in 1930 and it was the first time it had been done in the American League since Detroit's Harry Heilmann finished with a .403 average in 1923. Williams is the last man to accomplish the feat, it is a threshold that I doubt is crossed anytime soon or ever.