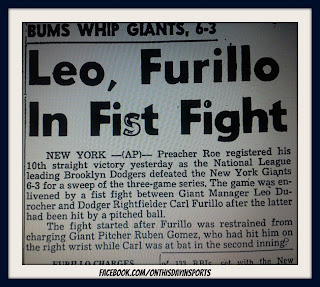 On September 6, 1953, in the second inning of a game against the New York Giants at the Polo Grounds, Brooklyn Dodgers outfielder Carl Furillo suffered a broken bone in his hand after a melee ensued after he was hit by a Ruben Gomez pitch. While Furillo was at the dish the Giants manager Leo Durocher was yelling as loud as he could "stick it in his ear", Durocher's hurler ended up hitting Furillo in the wrist and the National League's leader in batting average trotted to first while letting Durocher and company know that he was far from happy. Billy Cox followed Furillo in the order and while he was at the dish the words between Furillo and Durocher continued. Then the shit hit the fan, with a 2-0 count on Cox, Furillo had heard enough of Leo's lip and he made an angry charge toward the Giants dugout only to be met by the skipper in front of the dugout where they both wrestled each other to the ground. As players from both teams tried to breakup the fight, Furillo's hand was stepped on which broke the knuckle on his little finger. The injury put Furillo out of service for the rest of the regular season. However, it didn't stop him from winning the batting title or the Dodgers from winning the National League Pennant. Furillo did make it back to the lineup in time to play against the Yankees in the World Series where he hit .333 before the Yankees took the title in six games. When Furillo was asked about the incident he said "I didn't land one punch and neither did he. I would have given a $1,000 just to land one good punch." The Dodgers did win the contest 6-3 behind home runs by Roy Campanella and Jackie Robinson. It was Campanella's 38th dinger of the year which had broken Gabby Hartnett's record for home runs by a catcher, Hartnett hit 37 in 1930 for the Chicago Cubs. Unfortunately, the big story the next day was the big brawl that had put a key player on the shelf, rather than Campanella breaking a record that had stood for 23 years.