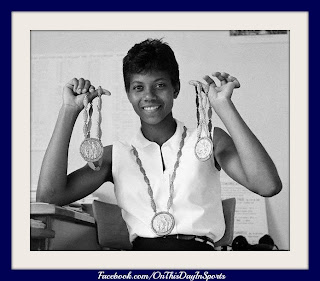 On September 2, 1960, 20 year-old Wilma Rudolph took the Gold Medal in the 100 meter while setting a World record for the event as she blazed to victory in 11 seconds flat. Unfortunately, Rudolph wasn't credited with the record becasue of a 2.75 meter tailwind but the gold medal was still hers. The road to gold was a difficult one for Rudolph. After being born premature and only weighing in at 4 1/2 pounds at birth, Rudolph had to overcome bouts with pneumonia and polio that caused paralysis in her left leg. The future gold medal winner had to wear a brace on her leg until she was 9 years old and her mother would rub the leg down and try various treatments that proved to work wonders. By the time she reached high school she had not only overcome the challenges that had been bestowed upon her, she became a talented athlete in basketball and led her team in scoring. While she was still in high school, Ed Temple the track coach at Tennessee State saw her potential and she began practicing with the college squad. In 1956, the 16 year old Rudolph had earned a spot on the United States track team and would go to her first Olympic games in Melbourne where she brought home a Bronze medal. It was just the beginning for Rudolph, she returned to the states and continued to train, after graduating high school she attended Tennessee State and would develop into the best in the world before heading back to the Olympics in Rome in 1960. The young woman that had overcame polio and a variety of other challenges would leave those games dubbed "The fastest woman in the world", she not only took the Gold in the 100 meter, she also took it in the 200 meter, and the 4 X 100 meter relay. The three time gold medal winner was an inspiration to not only young African American women she was also an inspiration to anyone that had ever had to overcome a disability as they watched her achieve her dreams.