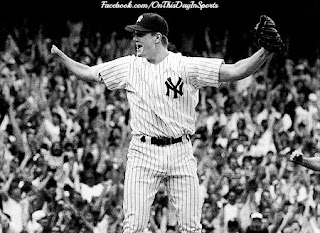 On September 4, 1993, Jim Abbott no-hit the Cleveland Indians as he led the Yankees to a 4-0 win at Yankee Stadium in New York. The Yankees hurler who was born without a right hand had overcome the obstacle and not only reached the major league level but had achieved something that most pitchers simply can only dream of. Abbott scattered 5 walks throughout and struck out 3 men. With Abbott just three outs away from making history in the ninth, Kenny Lofton led the inning off with a bunt attempt in order to make the one handed pitcher field the ball. It didn't work, Lofton was booed to no end after his feeble attempt that was fouled off before he grounded out to second. Felix Fermin followed Lofton up with a long line drive that Bernie Williams tracked down in the outfield for the second out, before Carlos Baerga hit a routine grounder to short that capped off the eighth no-hitter in the history of the Yankees organization. Abbott credited his defense for playing great behind him, as well as his catcher Matt Nokes for calling a great game. As the crowd of 27,125 stood and cheered Abbott tipped his cap to the crowd, it was a thrilling moment for the pitcher and everyone involved.

Check out the box score: http://www.baseball-reference.com/boxes/NYA/NYA199309040.shtml
Posted by Wade Forrester at 12:28 AM