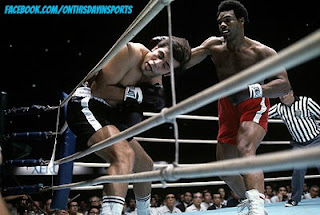 On September 1, 1973, George Foreman traveled to Tokyo, Japan to defend his Championship Title for the first time since he had taken it from Joe Frazier in January of that same year. The opponent that Foreman was set to face, was Jose "The King" Roman. Roman was the first ever Puerto Rican to challenge for the belt. Big George made quick work of the man who called himself the King. From the beginning it looked as if Roman was going to try and dance around his opponent in an attempt to use his speed to avoid the thunderous blows of the champ. They were unavoidable blows, Foreman's strategy was to go for the quick knockout and it worked. Within a minute the champ had Roman reeling as he landed heavy blows that sent him crashing down. After Roman regained his footing Foreman quickly put him right back on the canvas, however, Roman bounced right back up and went back for another serving of Foreman's fists and Forman obliged.  The big man landed several crushing blows before Roman went down like a sack of potatoes. Just two minutes after the fight began Roman was counted out and Foreman remained the Heavyweight Champion of the World. Foreman successfully defended the title against Ken Norton in '74 then it was taken from him by Muhammad Ali later that same year.

Watch the fight here: https://www.youtube.com/watch?v=RRHeelzr2-Q
Posted by Wade Forrester at 1:51 AM