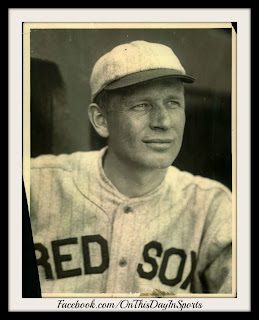 On September 7, 1923, Boston Red Sox hurler Howard Ehmke no-hit the A's at Shibe Park in Philadelphia. Ehmke was assisted by a 3 for 3 performance by Ire Flagstead that led to the 4-0 no-hit victory. It was the tenth no-hitter in the history of the Red Sox organization. The bid for the no-no was nearly broke up in the seventh when Philadelphia's pitcher Slim Harriss hit what should have been a double but failed to touch first base and was called out to keep the bid alive. It was the only no-hitter Ehmke ever tossed, ironically six years later he was a member of the A's and even started the first game and the final game of the World Series for them as they won the title in five games over the Cubs.

Check out the box score: http://www.baseball-reference.com/boxes/PHA/PHA192309070.shtml
Posted by Wade Forrester at 12:55 AM