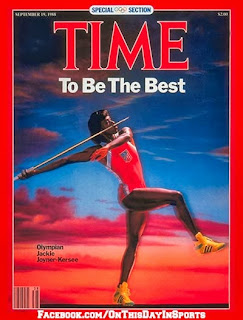 On September 24, 1988, Jackie Joyner-Kersee battled through a knee injury and won the gold medal in the seven pronged heptathlon event at the Summer Games in Seoul, South Korea. On the first day of the event Joyner-Kersee opened up a big lead despite injuring her knee in the second event of the day. She still managed personal bests in the 100 meter and the shot put before seeking therapy for the injured knee. Like all great athletes she put the pain aside and performed admirably. With her best event on tap the long jump she had to compensate for the injured knee by pushing off on her right foot, normally it would have been her left. The only way you would know she was injured was if you were told, she pulled off a record setting 23 feet 10 and 1/4 inches in the long jump and was on track to win the gold. The knee did hamper her in the javelin throw but she finished strong with another personal best in the 800 meters to win the gold medal. The East St. Louis native's final score for the heptathlon was a record 7,291 points, that record still stands today. Joyner-Kersee was arguably the best woman athlete of her time, she won a total of four gold, one silver, and two bronze medals in four trips to the Olympic Games.

You can watch a short video about the event here: http://www.youtube.com/watch?v=_Z-QfDiV2XA
Posted by Wade Forrester at 12:02 AM