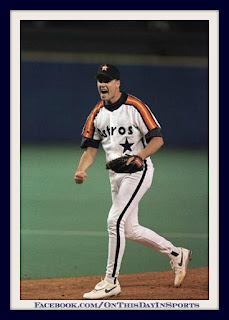 On September 8, 1993, Astros pitcher Darryl Kile no-hit the New York Mets in a 7-1 win at the Astrodome in Houston. Kile retired the first ten batters he faced before issuing a walk to Jeff McKnight who scored on a crazy play with Joe Orsulak at the dish. Kile's pitch got past his catcher Scott Servais and the backstop thought it hit the batter so he didn't go after it, in the meantime Mcknight was wheelin around and headed to third as Jeff Bagwell retrieved the ball and attempted to throw him out at third base. The throw went wide of the bag and McKnight scored while Bagwell was charged with the error. Following McKnight's walk Kile set down the next 17 men he saw despite the defensive miscue that led to the run. Kile had his no-no held together by two outstanding plays in the seventh. The first was a hot shot by Eddie Murray right down the third base line that Ken Caminiti had to dive hard to his left to make the play on, it was the hardest hit ball of the night and Caminiti came up big. One batter later Adujar Cedeno made another sensational grab deep in the hole at short, then turned and set the Mets batter Joe Orsulak down with a strong throw to Bagwell at first to keep the no-no intact. Kile put himself in the record books with a routine grounder by Todd Hundley before striking out Tito Navarro and Chico Walker, making him the ninth member of the Houston Astros to pitch a no-hitter. As soon as the last strike crossed the plate Servais and Kile along with all the other members of the Astros squad ran into celebrate the historic milestone. It was a special moment for the backstop and the hurler as they had made their way through the minors together and had accomplished something that would have just been a dream the day before. Servais joked that they would be on the golf course at 55 years old and Kile would tell him how he went against the pitch the catcher called, while Servais said he would take all the credit, it had to be one of the greatest days in both of their professional careers. Kile and Servais wouldn't get to have that conversation that was joked about because the pitcher passed away in a Chicago hotel in 2002 when he was a member of the St. Louis Cardinals. While his life ended way too early, today is a day to remember a great accomplishment in his life, it was great life.

Check out the box score: http://www.baseball-reference.com/boxes/HOU/HOU199309080.shtml
Posted by Wade Forrester at 12:02 AM