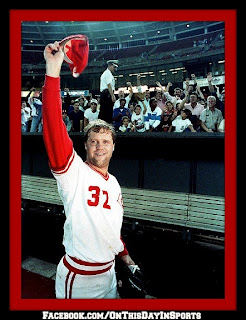 On September 16, 1988, 16,591 Cincinnati Reds fans witnessed the first perfect game in the long history of the franchise when Tom Browning tossed a perfecto against the Los Angeles Dodgers at Riverfront Stadium. Browning needed the perfect performance as Tim Belcher tossed a 3 hit gem of his own. Belcher held the Reds hitless through the first five innings, only giving up a walk to Eric Davis in the second. Belcher lost his bid for a no-no when Barry Larkin hit a two out double in the sixth, that was followed with a high bouncer off the bat of Chris Sabo that Dodgers third baseman Jeff Hamilton overthrew his first baseman Mickey Hatcher that allowed Larkin to score an unearned run. Browning had no such hiccups, the Cincy hurler threw 22 of 27 first pitch strikes and struck out 7 while every other ball hit into play was hit right at a teammate for a quick out. Browning had a no-hitter broken up on the 27th out earlier in the season but that wouldn't be the case on this day as he came out and tossed the perfect ninth. He started the inning with a flyball out by Rick Dempsey, then induced Steve Sax into a groundout, before striking out pinch hitter Tracy Woodson to put the perfecto in the record books. It was the first perfect game since Sandy Koufax tossed a perfecto in 1965 and the first time a Reds pitcher achieved perfection.

This is a great video about Browning's quest to perfection: http://wapc.mlb.com/play?content_id=3480093