August 31, 1990: Griffey Sr. and Jr. Become the First Father/Son Duo to Play Together in The Majors 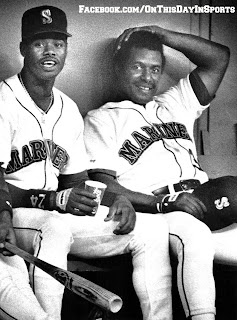 On August 31, 1990, at the Kingdome in Seattle, left fielder Ken Griffey and center fielder Ken Griffey Jr. became the first father/son duo to play in a major league baseball game together. The duo put together back-to-back hits in the first inning and they both scored a run in the three run frame. The Mariners would go onto win the contest 5-2. Just two days earlier the Cincinnati Reds released the 40 year old Sr., which led to the Mariners adding him to their roster. The well seasoned veteran came to the team after nearly 20 seasons in the majors that was spent between the Reds, Yankees, and Braves, while his son was in his second season in the majors and was quickly on his way to being a superstar. Less than a month after they played their first game together the father/son duo would power up for back-to back home runs, which was another first. They only played in 51 games together before Ken Griffey Sr. retired in June of 1991, years later Griffey Jr. would say "I got to play with my dad, that's the biggest thing that ever happened to me other than the birth of my children. That's bigger than any record I'll ever set." That's what you call livin a dream folks.