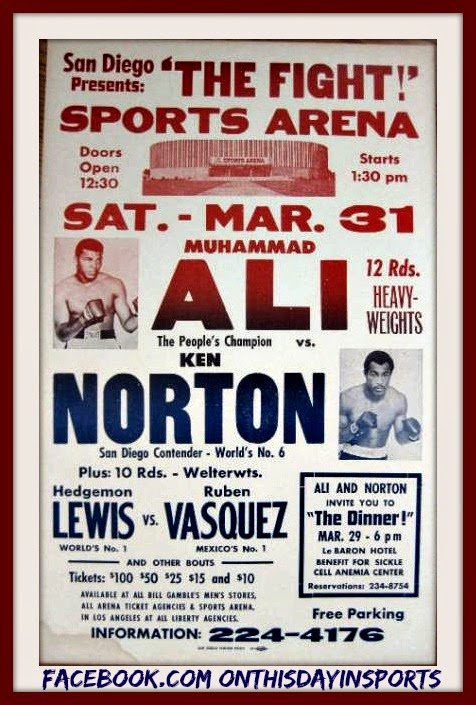 On March 31, 1973, in front of more than 12,000 people at the San Diego Sports Arena in California, Ken Norton broke Muhammad Ali's jaw in a bout that saw Norton claim victory by split-decision in 12 rounds. When the bell rang after that first round, the former heavyweight champion of the world came to his corner and informed his trainer Angelo Dundee that he thought it might be broken. There were no signs of visible damage on Ali other than a little bit of blood coming from the corner of his mouth, so he continued to battle until the bitter end. While it was a bitter end for Ali, it was a sweet victory for Norton who would see Ali again.

Norton, a 28-year-old ex-Marine came into the fight as a 5 to 1 underdog and stunned everyone as he handed "The People's Champion" a stunning defeat. Despite the broken jaw Ali hung in until the end. Although, he was a much different Ali than what the people were used to seeing. In the 11th round Norton looked like he might be tiring. He had never gone more than 10 rounds in his career, and Ali was steadily inflicting damage upon him. However, Norton came out in the 12th and final round trying to knock Ali out. He knew the scorecards would be close to even. With the crowd cheering him on Norton backed Ali into the ropes and unloaded a furious combination as he battled toward victory.

Nearly six months later Norton and Ali stepped in the ring once again, and Ali avenged the loss. Much like the first fight it too went the distance, but this time it was Ali who earned the split decision. Norton then fought George Foreman in an attempt to win the Heavyweight Title. Foreman destroyed Norton in two rounds to retain his title. In 1976, Ali beat Norton in their third and final meeting. The bout in '76 went 15 rounds before the judges scorecards determined that Ali won by a unanimous decision. It marked the end to a trilogy that began with a broken jaw for who is considered to be one of the greatest boxers of all time. The first fight also made Ken Norton a household name as he earned the victory. Before the fight his biggest purse was $7,500, the Ali  fight earned him $50,000, many more dollars and a lot of recognition was on the way.
Posted by Wade Forrester at 1:02 AM