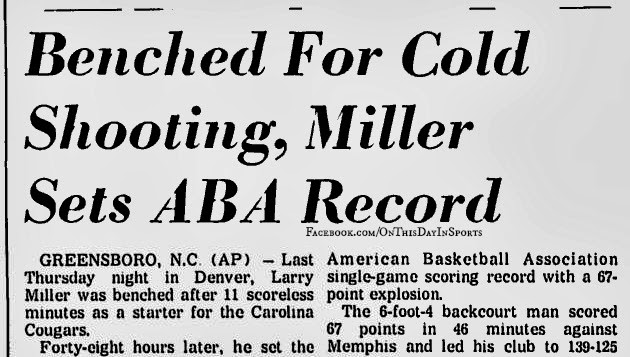 On March 18, 1972, Larry Miller of the Carolina Cougars set an ABA record when he scored 67 points in a 139-125 victory over the Memphis Pros on his home court in Greensboro, North Carolina. Just 48 hours earlier, Miller found himself riding the pine after going 11 minutes without scoring against the Nets in New York.  The 6' 4" big man who played his college ball at North Carolina hit on 25 of 40 shots from the floor and converted 17 of 23 free throw attempts. 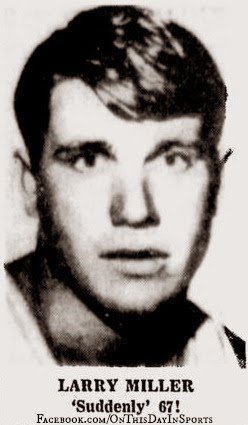 Miller, who took home the ACC men's basketball player of the year in '66 and '67, was drafted to play for the NBA's Philadelphia 76ers in '68. He never did play in the NBA as he chose to join the ABA instead. Initially, he was a member of the Los Angeles Stars, then joined the team in Carolina after 21 games during the '69-'70 season. Miller spent nearly 4 seasons with the Cougars, and scored more than 3,000 points while wearing their uniform. Miller joined the San Diego Conquistadors for the '72-'73 season as a part of an expansion draft. After one good year in San Diego, Wilt Chamberlain joined the Conquistadors as a coach and publicly benched the man who owned the single game points record for the league. He played just 7 games in San Diego before Chamberlain and company traded him to the Virginia Squires. After one year in Virginia, he was traded to the Utah Stars who had moved from L.A. in 1970.

Miller spent nine years on the court as a professional. As a star of the ABA, he did not receive the recognition that he might have gotten if he had joined the NBA instead. However, over those nine years, Miller scored 6,595 points, grabbed 2434 assists, and dished out 1,155 assists. His 67 point performance solidified his spot in the history of the league and in the game as well. Before that record setting performance his previous best was 47 points. He credited his teammates for putting the ball in his hands as he marched his way into sports history.

You can view his career numbers here: http://www.basketball-reference.com/players/m/millela01.html
Posted by Wade Forrester at 12:02 AM