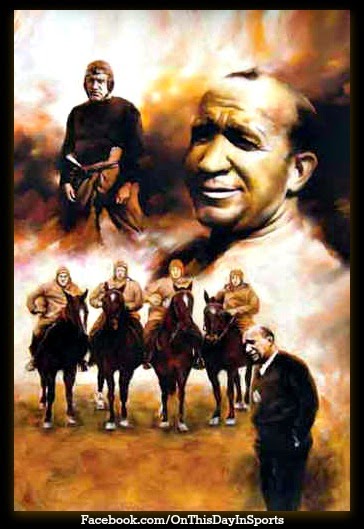 On March 31, 1931, Knute Rockne was killed when the plane that was carrying him and seven others exploded while flying through the skies of Bazaar, Kansas. There were no survivors. Rockne was regarded as one of the best football coaches in the history of college football as he led the Notre Dame fighting Irish to a 105-12-5 record from 1918-1930. He was just 43 years of age at the time of his death.

The fateful trip that took the life of Knute Rockne was a trip to California where he was going to help in the production of the feature film called The Spirit of Notre Dame. He had made a planned stop in Kansas City to visit his two sons. After the visit he boarded the plane that was set to take him on the rest of his trip around 9:15 in the morning, less than two hours later a farmer tending to some cows looked up and seen the plane explode. After the plane came crashing down the farmer rushed to the site of the crash where he realized no one could be saved.

The President of the United States, Herbert Hoover called Rockne's death a national loss. His funeral held in South Bend, Indiana drew thousands of people, and tens of thousands more tuned in on the radio to listen to the services, a legend had been lost, but his legacy would stand the test of time. That legacy included the innovation of the forward pass, 4 National Championships, and the famed Four Horsemen who had helped lift Rockne and the Irish to the National Title in 1924. His "Win one for the Gipper" speech is one of the most famous speeches that has ever been given in the world of sports. While we reflect on Rockne's journey on earth ended on this day so many years ago, the most important thing is to remember the life that came before that day. It was a life that will never be forgotten.
Posted by Wade Forrester at 3:32 AM