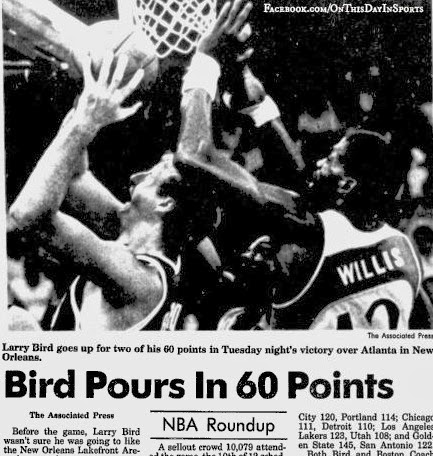 On March 12, 1985, in front of a sold out crowd at the Lakefront Arena in New Orleans, Boston Celtics legend Larry Bird scored a career high 60 points in a 126-115 win over the Atlanta Hawks. Bird not only scored a career best, he set the franchise record that had been set by Kevin McHale nine days earlier who had put together a 56 point performance. Bird's 60 point performance still stands as the franchise record today.

Coming into the contest, Bird's excitement level for playing New Orleans was low. He thought it was too hot in the gym, and simply wasn't sure how well he would adjust. Once the ball was tipped he adjusted quite well. The Hawks had scheduled 12 "home" games in New Orleans that season. This was the 10th game of those 12. Most of the games before Bird's legendary night drew less than 4,000 people. This game was packed wall to wall with 10,079 souls. What they witnessed was the performance of a lifetime.

Atlanta kept the ballgame close throughout. They were led by Dominique Wilkins' 36 points. They just couldn't stop the one man wrecking crew who wore the number 33. Bird hit on 22 of 36 field goal attempts and converted 15 of 16 free throws as he put his name in the record books. With the help of his teammates he scored the last 16 points for the Celtics with his last two points coming on a 17 foot jump shot at the buzzer. Bird's previous best was 53 which he accomplished in 1983. When Bird spoke after the game he was quick to acknowledge his teammates who dished him the ball time after time as he finished the job for them.

The career of Larry Bird is a tale that will be told for generations to come. The three time NBA Champion and 12 time All Star was inducted into the Naismith Basketball Hall of Fame in 1996. His list of awards and accomplishments is a long one, and on that list there is one 60 point performance that will not be forgotten. To date, only 22 men have etched their name onto that list, and only four of them have accomplished it more than once. It is one of the greatest feats in professional basketball.

http://en.wikipedia.org/wiki/List_of_National_Basketball_Association_players_with_most_points_in_a_game
Posted by Wade Forrester at 12:19 AM