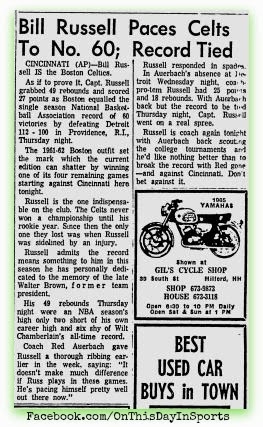 On March 11, 1965, Bill Russell grabbed 49 rebounds in a 112-100 win over the Detroit Pistons on a  neutral court in Providence, Rhode Island. The mark of 49 rebounds is the third highest total in NBA history. Russell himself had reached the mark in '57, and in '60 he set an NBA record with 51 rebounds in a game. That record fell later that same year when Wilt Chamberlain grabbed 55 in one game, which stands as the record today.

Russell not only led the way in the rebounds department, he also led the way in the points department with 27. The win for the Celtics tied an NBA record for wins in a season. They would surpass that record with two more wins before going on a championship run. Russell was a guiding force with the Celtics who had not won a championship until he arrived on the scene in 1957. Russell would lead the Celtics to a grand total of 11 Championships in 13 seasons, which is a simply astounding stat.

In his 13 seasons in Boston, Russell led the team to 11 Championship titles. Along the way he appeared in 12 All Star games, scored 14,522 points, and grabbed 21,620 rebounds. To date, only Wilt Chamberlain stands in front of him on the all time rebound list with 23,924. Russell will forever be remembered as one of the greatest to ever step on a basketball court. He was enshrined into the Naismith Basketball Hall of Fame in 1975.

Check out the all time rebounds list for a single game here:
http://en.wikipedia.org/wiki/List_of_National_Basketball_Association_players_with_most_rebounds_in_a_game
Posted by Wade Forrester at 12:43 AM