On March 16, 1961, Montreal Canadiens winger Bernie Geoffrion became just the second player in  NHL history to score 50 goals in a season. The man nicknamed "Boom Boom" achieved the historic milestone during a 5-2 victory over the Toronto Maple Leafs in Montreal. The only other player to score 50 goals was Geoffrion's longtime teammate Maurice "Rocket" Richard who scored 50 goals during the '44-'45 season. Despite having two regular season games left, Geoffrion  was not able to surpass Richard's record, and would have to settle for a matching the mark.


Geoffrion compared his quest for 50 goals to Roger Maris' home run chase, as he too suffered as pressure mounted to break the record. In 1955, Geoffrion beat out Richard for the scoring title after The Rocket was suspended late in the season. The fans in Montreal wanted Geoffrion to more or less concede the title that Richard seemed to have clinched before his suspension. Geoffrion didn't listen to their pleas and surpassed Richard's scoring total on the last day of the season which led to him taking home the Art Ross Trophy. Rather than cheering for Geoffrion's achievement the fans booed, so years later when he was going after the coveted goals record many had not forgotten. As he approached the record setting mark, Geoffrion couldn't sleep at night. When he finally scored his 50th he felt the weight of the world lifted from his shoulders.

Geoffrion not only took home his second Art Ross Trophy after the 50 goal campaign, he also took home the Hart Memorial Trophy as the league's MVP. Unfortunately, the Canadiens fell to the eventual Stanley Cup champion Chicago Blackhawks in six games in the playoffs. Geoffrion was hampered by a knee injury during that playoff run and missed the final two games of the series. However, during his 14 years in Montreal, Geoffrion was a 6 time Stanley Cup Champion, and an 11 time All Star. He hung up his skates after spending the last 2 years of his 16 year career with the New York Rangers. In 1972, Geoffrion was inducted into the Hockey Hall of Fame. 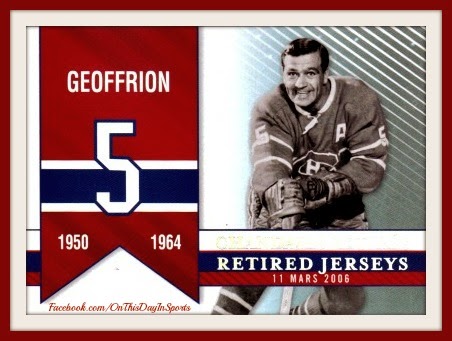 Bernie Geoffrion  is a very interesting figure from hockey's past. He is credited with revolutionizing the
slapshot.  After his playing days ended he became the coach of the New York Rangers only to have health issues force him to resign after 43 games. In '72 he became the head coach of the Atlanta Flames, but once again was forced to resign after 52 games due to health concerns. It was recurring theme in the coaching career for the man who had scored 50 goals for the Canadiens in '61, as he became the coach of his old team in Montreal in 1979. The job was one that he had dreamed about. However, 30 games into his tenure as the Canadiens coach he was forced to resign once again. On March 11, 2006, the Canadiens organization retired Geoffrion's #5, six months earlier he had been diagnosed with stomach cancer. As fate would have it, Geoffrion passed away the same morning that the team was going to raise his number to the rafters. While it is a sad end for the story of Bernie Geoffrion, his life and career will forever be remembered. The fact that a kid will walk into the rink in Montreal, look up and see his number, then perhaps ask his dad who he was, means that his legacy will live on forever.

I couldn't figure out a good place to put Geoffrion's 50 goals summary on the blog, so I uploaded it to my imgur account. You can view it here: http://imgur.com/YoJ3Mnf
Posted by Wade Forrester at 1:27 AM