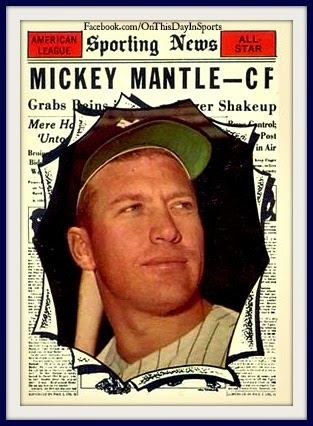 On March 1, 1969, at the New York Yankees Spring Training facility in Fort Lauderdale, Florida, 37-year-old Mickey Mantle held a press conference to announce that he would be retiring from the game of baseball. Mantle spent 18 seasons wearing the Yankees pinstripes and carried a .298 career average along with 536 home runs into the sunset. He joined the likes of Babe Ruth, Lou Gehrig, and Joe DiMaggio in the long list of Yankees legends to carry the team to multiple championships. Mantle himself celebrated seven World Series titles, appeared in 20 All-Star games, won three American League MVP awards, and even won the triple crown in the career that ended in Cooperstown, New York. Unfortunately, Father Time knocks on even the greatest of mens doors and the day Mantle announced his retirement there was a knock.

The press conference began with the President of the club Mike Burke telling the press that Mantle had reached a firm conclusion. Then he turned the mic over to Mickey. Instead of making a statement Mantle said "I'm open for questions."  As expected the first question was why. Mickey said "I'm not going to play baseball. That's all I know." He went onto say "I can't play anymore. I don't hit the ball when I need to. I can't steal when I need to, and I can't score from second when I need to." Mickey had been plagued by injury for years and they had simply caught up with him. After speaking with his skipper Ralph Houk the decision had been made. Mantle was a proud man and did not want to bring his teammates down with play that was not up to par.

Mantle broke into the league in 1951. That same year Willie Mays joined the Giants. The kid from Oklahoma didn't have the greatest rookie year as he spent half the season in the minors and hit just .267 in 96 games at the major league level. However, he hit 15 home runs with 65 ribbies which was a glimpse at the potential he truly had. That potential would soon develop into one of the most fear bats in the game.

The first time he hurt himself was in the 1951 World Series. It was a knee injury that happened in the second game when he tripped over a drain in the outfield which led to him being carted off the field. He came back strong from the injury in '52 as he replaced the legendary Joe DiMaggio in the dangerous Yankees lineup. During that '52 season he hit .311 blasted 23 dingers and knocked in 87 runs. Mantle hit over .300 in ten seasons total, which included an eye-popping .353 in 1956. That '56 season was the grandest of them all statiscally. Along with the .353 average, Mantle parked 52 balls in the seats and picked up 130 ribbies as he took home one of baseball's highest honors, the triple crown. That was also the first MVP season for The Mick who took home that honor again in '57 and '62 as well.

Mantle hit gargantuan shots that led him to legendary status long before he hung up his cleats. At the time of his retirement only Babe Ruth and Willie Mays could boast more than Mantle's 536 homers. He single-handedly coined the term "tape measure shot" in '53 when he hit a ball against the Senators Chuck Stobbs that was estimated to have traveled 565 feet as it sailed out of Griffith Stadium in Washington. He displayed his raw power during the World Series regularly. In fact, he hit 18 home runs in the Fall Classic which is a record that still stands today.

While Mantle did battle injuries he played in 2,401 games in a Yankees uniform. It was a team record until 2011 when Derek Jeter surpassed him. He played in 12 World Series and is at or near the top in many categories when it comes to World Series records. His #7 was retired by the Yankees and in 1974 he joined baseball's immortal bunch by being enshrined into the Baseball Hall of Fame.
Posted by Wade Forrester at 2:30 AM