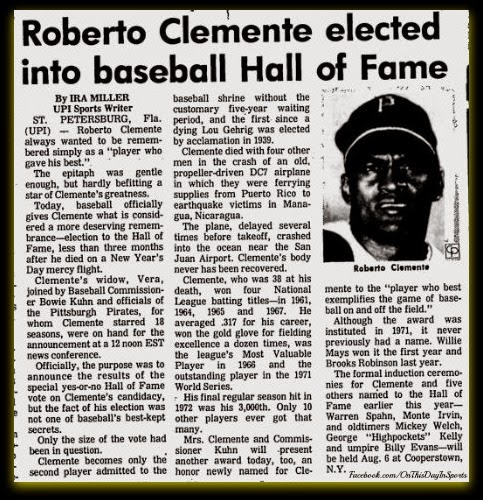 On March 20, 1973, Roberto Clemente was elected to the Baseball Hall of Fame. 11 weeks earlier the superstar who had donned the uniform of the Pittsburgh Pirates for 18 seasons had been killed in a plane crash while delivering aid to earthquake survivors in Nicaragua. He was 38-years-old at the time. Clemente was only the second player in the history of the game to be elected to the Hall of Fame before the mandatory 5-year waiting period had been served. The other player was Lou Gehrig.  Clemente's legendary career included a .317 average, exactly 3,000 hits, 12 Gold Glove awards, 15 All Star appearances, 4 National League batting titles, as well as 2 World Series Championship titles.

Clemente needed 318 (75%) out of the 424 votes cast to join baseball's greatest men. He received 393 votes which was good for 93% of the votes cast. There were 29 writers who voted no, and two writers who did not vote at all. Just thinking about the fact that there were writers who did not believe he deserved the honor is simply astounding. At least 393 of them got it right. It should be noted that most of the votes against Clemente were writers who thought the 5-year waiting period should be served, however the majority saw things differently.

The day the announcement was made, Clemente's wife Vera was on hand. She was still in a state of shock after losing her husband. She spoke of her three young children Roberto Jr., 7, Luis,6, and Enrique who was 4. The children were at home in Puerto Rico, but would attend Opening Day ceremonies with in Pittsburgh, where they watched their father's number 21 retired, and they also attended the induction ceremony in August. She smiled when she quoted Roberto Jr. saying "Tell the Pirates to save a position for me." 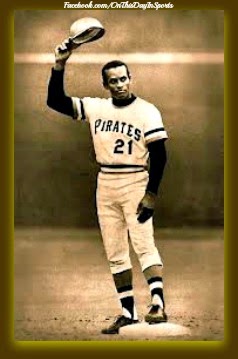 In August of '73, Mrs. Clemente stood before a crowd in Cooperstown and accepted a replica Hall of Fame plaque on behalf of her late husband. In her acceptance speech she said, "This is Roberto's last triumph. If he could have come here, he would have dedicated it to the people of Puerto Rico, the fans of the Pittsburgh Pirates, and the fans throughout the United States." Even in death he exemplified class.

Clemente was more than a ballplayer as he had used the resources he had at his disposal to help others. The way he lost his life is a testament to who he was. After his death, the Commissioner's Award was renamed the Roberto Clemente Award. The award is given annually to a player who best exemplifies baseball, sportsmanship and community involvement. The legacy of Roberto Clemente is one that will live forever.  If you ever get the chance to walk through the Hall of Fame in Cooperstown, New York, be sure to tip your cap when you get to his plaque. He truly is one of the greatest heroes from baseball's past.
Posted by Wade Forrester at 2:14 AM