March 10, 1962: The Phillies Stand Up Against Segregation 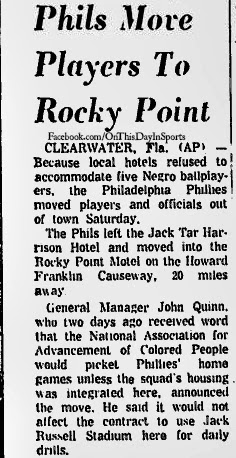 On March 10, 1962, 15 years after Jackie Robinson broke through Major League Baseball's color barrier, the Philadelphia Phillies organization took a stand against racial segregation when they moved from the Jack Tar Harrison Hotel in Clearwater, Florida to the Rocky Point Hotel near Tampa 20 miles away. The hotel that refused service to their Negro ballplayers came under fire by the NAACP who had threatened to picket the Phillies Spring Training games unless a change was made. The organization heard the message loud and clear as they told their players and staff to pack their bags. Some might not realize that in the age of racial unrest the world of sports was a unifier that was instrumental in helping the the civil rights movement go forward.

The Jack Tar Harrison refused to accommodate Tony Taylor, Ted Savage, Marcellino Lopez, and Ruben Amaro. A total of 29 players, eight club officials, along with Manager Gene Mauch and his seven staff members all packed their bags for the move. In July of that same year the Jack Tar Harrison announced that they would allow Negro ballplayers. The president of the hotel Ed C. Leach made it clear that the hotel would allow the ballplayers as well as convention guests of color. He also made it clear that this did not mean that the hotel would be integrated as far as the public was concerned. It just goes to show that the steps that were taken were baby steps at best.

This was not the first time a major league ballclub took a stand against racial segregation. The New York Mets and the St. Louis Cardinals made it be known they would not stand for it either. It was a sign of the times, as well as a sign of things to come. Martin Luther King Jr. once spoke of a dream of a world in which all men are created equal. As men stood together no matter what race or creed the world of sports did help that dream advance.
Posted by Wade Forrester at 2:12 AM