March 8, 1971: Frazier Defeats Ali In The Fight Of Century 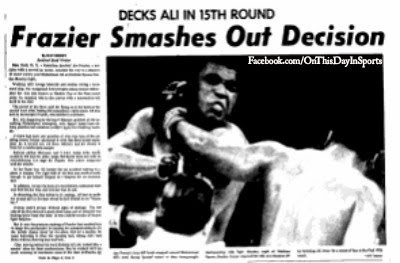 On March 8, 1971, at Madison Garden in New York City, "Smokin Joe" Joe Frazier defeated Muhammad Ali with a 15 round unanimous decision in what was billed "The Fight of the Century." Ali had been stripped of his title three and a half years earlier for his refusal to serve in Vietnam, which led Frazier beating a number of opponents on his way to being named the undisputed heavyweight champion. In the eyes of many Ali was the rightful champion; Frazier proved otherwise. Frazier and Ali would fight two more times with Ali winning both of them. However, when they met for the first time Frazier let him know that he was not going to let go of his title easily. In fact, he refused to let it go on that day in March of '71.

Along with the 20,000+ that packed Madison Square Garden millions upon millions of people tuned  in worldwide. It was viewed in 39 countries and 12 different languages were spoken ringside. An estimated 300 million people tuned into the event that would live up to its billing. Frazier came into the bout a 6-5 favorite, but that did not deter the confidence of Ali who considered himself the champion all along.

Ali wasn't the only one who considered himself the champ as newspapers printed stories saying that Frazier was a pretender. He would have to beat Ali to shed that label. With celebrities on hand and police officers there to control the crowd the fight arrived it took on a circus atmosphere. Once the gloves were strapped on and the bell rang the atmosphere would take a backseat to the epic fight that was about to take place. Ali dominated the first three rounds with precise combinations, but in the closing seconds of the third round Frazier landed a left hook that snapped Ali's head back. The tide was about to turn. Frazier dominated the fourth round and by the sixth Ali was showing signs of tiring. The man formerly known as Cassius Clay did hold his own with the champ until late in the 11th round when Frazier cornered him and unleashed a fury of punches that nearly sent him to the canvas. He was able to keep on his feet until the bell ran, but damage had been done, and Frazier had clear control of the fight. He would not relinquish that control either.

As Frazier continued to show the world that he was the rightful champion the fight would reach the 15th and final round. Early in the round, Frazier landed a vicious left hook to Ali's jaw that laid him out across the canvas on his back. It was only the third time in Ali's career that he had been knocked down. Ali regained his footing and was able to get through the round, but there was a clear winner and his name was Joe Frazier. The scorecards looked like this: Referee Arthur Mercante had it scored 8-6-1, Judge Artie Adello scored it 9-6, and the other judge Bill Recht scored it an overwhelmingly 11-4 decision for Frazier. Those that called Frazier a pretender would now have to eat their words as Frazier had showed that he was the true champion.

Watch the fight here: https://www.youtube.com/watch?v=v_TgAc4ESQ4
Posted by Wade Forrester at 2:40 AM