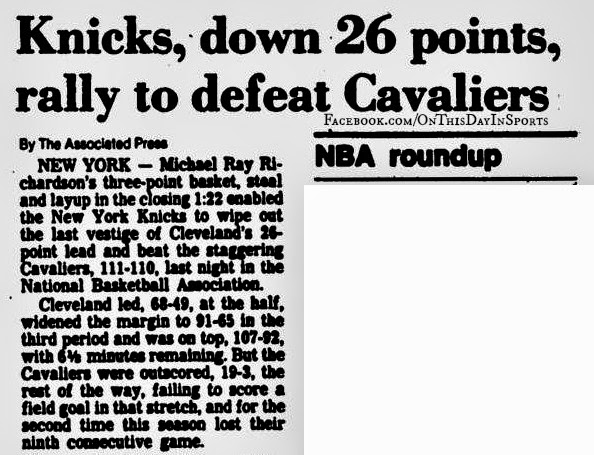 On April 1, 1982, trailing by 26 with four minutes left in the third quarter, the New York Knicks began to mount a comeback of epic proportions on the way to a 111-110 victory in front of a home crowd at Madison Square Garden.

The Knicks were trailing  91-65 when they began to erase the deficit. The Knicks had narrowed the gap to 107-92 with 6 and a 1/2 minutes to play. They continued to whittle away at the lead, and with just 1:22 left on the clock Michael Ray Richardson drained a three-pointer to bring the score to 110-109 Cavs.

Moments later, Richardson came up with a key steal and dropped the game winner with just 63 ticks left on the clock. The Cavs had several opportunities to come back, but couldn't make it happen, so the game went into the books as the biggest comeback in Knicks history.