On March 19, 1961, veteran golfer Bob Goalby knocked down a PGA record 8 consecutive birdies at the St. Petersburg Open in Florida. The record setting performance earned Goalby a three stroke advantage over his closest challenger Ted Kroll as he shot 65 in the final round. Over the course of three days Goalby shot a course record for the 72 hole event with a 261. The record for consecutive birdies stood until 2009 when Mark Calcavecchia  drained 9 birdies in a row at the RBC Canadian Open. The previous record of seven birdies in a row had been set in 1954, by Tommy Bolt in San Antonio, then matched twice, before Goalby surpassed it.

Goalby was a talented athlete throughout his youth. A native of Belleville, Illinois, he attended the University of Illinois where he played in multiple sports which included football, as well as the one which would make him famous, golf. In 1952, after his college days came to an end, Goalby entered the world of professional golf. It took him until 1958 to pick up his first win, from there he became a name that was regularly seen near the top of the scorecard. With that first win of his career included Goalby's name led the way on the scorecard 14 times. Along the way he not only set the birdies record, but he also was a part of a controversial Master's Championship win in 1968.

On the final day of the Master's in '68, it looked like a playoff was going to have to decide the winner, only to have an error on a scorecard change the course of history. With Goalby locked into a dead heat with Roberto De Vicenzo all who were watching were prepared to see the playoff take place. De Vicenzo's playing partner accidentally marked a 4 on the 17th hole when De Vicenzo had actually shot a 3. Once De Vicenzo signed the scorecard it stood, and he had essentially shorted himself a stroke, and handed over the victory to Goalby. It is one of the crazier stories in golf history, and I'll try to cover it this coming August. 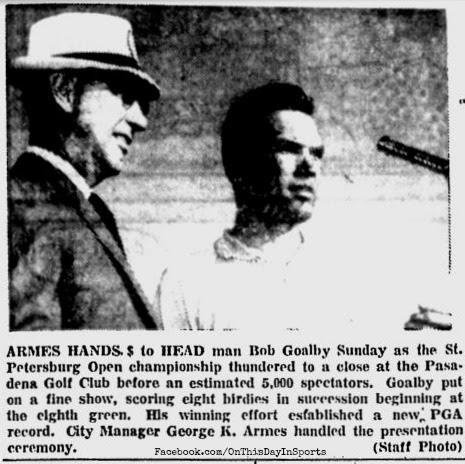 Long before the gaffe that occurred in the '68 Master's, Goalby was making a name for himself in the World of Golf. When he stepped on the course in St. Petersburg that morning in March of '61 he had no idea that he would set a record that would stand for more than 48 years. After pocketing the winning check, Goalby described his last round by saying "It was unbelievable. After I got the range, I hit everything dead to pin. I just played like hell and used my old Black Maria." What he was referring to was an old putter he picked up from a pawnshop he had nicknamed "Black Mariah", he paid $2 for that putter. That $2 putter was one that helped him make history.

Several men matched Goalby's record before Calcavecchia surpassed him. You can view the list here: http://golf.about.com/od/progolftours/qt/consecbirdies.htm
Posted by Wade Forrester at 12:04 AM