March 5, 1922: Babe Ruth Decides His Contract With A Coin Flip 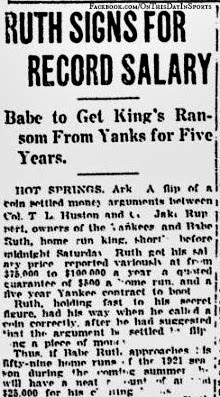 On March 5, 1922, New York Yankees slugger Babe Ruth solved a contract dispute with a flip of a coin. Ruth, along with the owners of the club Colonel T.L. Huston and Colonel Jacob Ruppert were involved in what was described as a marathon negotiating session. Shortly before midnight the Bambino offered to flip a coin to decide the issue. If he won the flip he would get what he was demanding; if he lost he would take the Yankees best offer. When Huston flipped the half-dollar piece Ruth called tails and won the toss. He would now be the highest paid player in all of baseball with a salary of $52,000 a season over the next 5 years.

The contract also included $500 per every home run hit. In '21 Ruth had blasted 59 home runs and had high expectations to continue to park the ball in the seats. They were expectations he would meet. At the time newspapers and fans alike merely speculated as to what Ruth was being paid. What they did know was he was the highest paid man in the game. He was being paid more than the Commissioner of Baseball Kennesaw Mountain Landis as well as the President of the American League Ban Johnson.

The newspapers of the day speculated that Ruth could be making as much as $100,00 per year as they were kept in the dark when it came to the actual amount. When Huston was asked about Ruth's salary he stated that it would make a railroad president proud. According to the Reading Eagle, their decision to not publish the actual amounts was their fear that it would cause the other stars in baseball run amuck stark mad.

Ruth had to sit out the first six weeks of that '22 season after being suspended by the Commissioner for participating in a barnstorming tour following the World Series. Despite that fact he still hit 35 dingers and knocked in 99 ribbies. He would continue to bash the baseball for years to come and every penny he earned would be money well spent. By today's standards $52,000 would equate to a little more than $724,000. What a bargain.

Posted by Wade Forrester at 1:41 AM