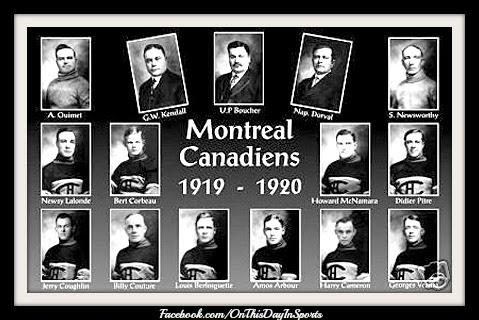 On March 3, 1920, the Montreal Canadiens set a still standing NHL record when they scored 16 goals against the Quebec Bulldogs in a 16-3 annihilation in Quebec. The Canadiens had recorded a 14-7  win over the Toronto St. Patricks in January of that same year, then surpassed that record setting performance with the 16 goal outburst that would prove to be a record that has stood the test of time.

The Bulldogs came into the game with one of their bigger stars in George Carey out with an arm injury and their netminder Frank Brophy was nursing a strained ligament. Brophy did play, but he did spend a lot of time looking at the puck in the net behind him. 36-year-old winger Didier Pitre was Brophy's worst enemy in the first  period as he scored the first goal, then stood by and watched Odie Cleghorn score a goal, before capping off a hat trick as he led the way in the 4-0 first frame. The door blew wide open in the second period as the Canadiens exploded for 7 more goals while Quebec was able to answer back one time. Down 11-1 after two the Bulldogs probably would have forfeited and got the hell out of there. 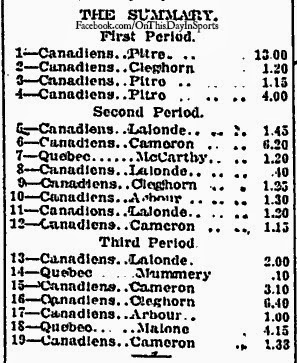 The Canadiens notched five more goals in the third while the Bulldogs snuck two more past Georges Vezina. With the 16-3 beatdown complete the game would be called an uninteresting contest. If they only knew that  the game would become a truly historic marker in NHL history they might have put a little bit of a different spin on it.

The closest challenger to Montreal's 16 goal single game record came in 1944 when the Detroit Red Wings blasted 15 past the New York Rangers. That game was the most lopsided affair in NHL history. You can read about it here: http://onthisdayinsports.blogspot.com/2014/01/january-23-1944-red-wings-destroy.html
Posted by Wade Forrester at 2:18 AM