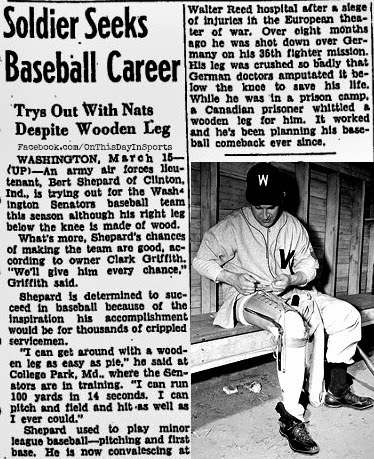 On March 15, 1945, World War II veteran Bert Shepard tried out with the Washington Senators. The 25-year-old Shepard had lost his right leg just below the knee cap after being shot down while piloting a P-38 over Berlin. After being shot down, German doctors amputated his badly crushed leg to save his life. While he was in a prison camp, a Canadian prisoner carved a wooden leg for him. He would later say the moment that he had that leg he was planning a comeback in baseball. The southpaw did sign on with the Senators as a pitching coach. At the time, the owner of the Senators, Clark Griffith said that he would get the chance to help out the club in any way he could. He did pitch in one game during that '45 season. The one appearance was an impressive one as he went 5 1/3 while giving up three hits and one run. Unfortunately, the Senators fell to the Boston Red Sox 15-4 that day as Shepard came in with his club in a hole that they could not dig out of. While the story of Bert Shepard's major league career on the mound only covered a little more than 5 innings, the story of his life is one to be admired. He was a man who would not let his limitations hold him back, and he served as an inspiration to many other war heroes who had suffered similar injuries.

The day that changed Shepard's life forever came on May 21, 1944. It was on that day that he was shot down while flying his 34th mission. Shepard could have stayed at the base that day, he had flown on five consecutive days, but he loved to fly, and was one who took pride in his abilities. When he took off from the airbase in Colchester, England he had no idea how his life would be altered. The mission was to strafe trains, trucks, airfields, and storage tanks. The men who were carrying out this mission were excited to know that they were hitting the heart and soul of Germany as they flew over Berlin. Then it happened. As Shepard closed in on his target a shell ripped through his P-38, doing severe damage to his right foot, and his forehead was shattered above his right eye. The head injury would take a plate to repair, while his leg could not be saved. Shepard was lucky to simply be breathing as his plane was 1 of 58 that did not return to England after that mission. I think it would be safe to say that many of those men were not as fortunate. 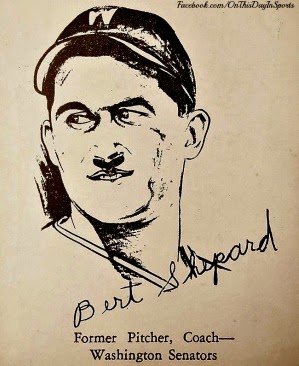 After being captured by the German's, Shepard was able to return stateside as a part of a prisoner exchange. It was less than 10 months after his plane was shot down that Shepard sat in the office of the Secretary of War and was asked what he would like to do with his future. Shepard wanted to fly again, but that was not an option, so he then told those in front of him that he wanted to play baseball. Before the war, Shepard played in the lower levels of the Chicago White Sox minor league system, and he believed that he could still play the game he loved. The owner of the Washington Senators heard of his desires to play ball and decided to give him a shot. In the eyes of many it was looked at as a publicity stunt to help put fans in the stands in Washington, in the eyes of Shepard he was just happy to get a shot. He pitched batting practice and impressed hitters before they even knew he had an artificial leg. While he hardly got to pitch for the club during the regular season, he did pitch in several exhibition games. One of those games was against the New York Yankees when Yogi Berra was playing in the Bronx. Berra didn't realize that Shepard had lost his leg when they faced each other and several years later he said to him "It's too bad you lost your leg, because you looked pretty good against us." That is a testament to how well Shepard looked with his prosthetic leg attached.

Shepard spent the rest of his career in baseball in the minor leagues. He was a player/manager until 1954, then turned his attention to the business world. Before that happened he had several other tryouts with major league ballclubs. While doing research for this I found an article from 1949 that had Shepard saying that he would play for one dollar a year. Now that is love for the game. He was very positive man who took his life in stride. Even today he should be an inspiration for those who have disabilities, as he refused to let his hold him back. Burt Shepard's name might not be on a plaque in Cooperstown, however, I do believe he is a true hero from baseball's past.