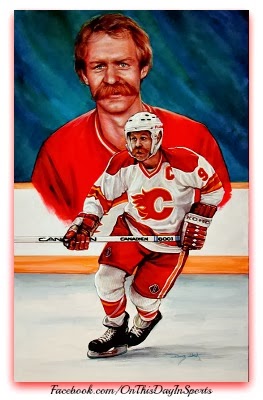 On March 7, 1989, in a 9-5 victory over the Winnipeg Jets in Calgary, Flames winger Lanny McDonald became the 23rd player in NHL history to score 1,000 points. The historic marker came just 2 minutes and 46 seconds into the contest when McDonald scored on a wraparound that he snuck past Winnipeg goalie Bob Essensa. McDonald would add another goal to his totals before the game came to an end. McDonald was in his 15th and final year of his career when he reached the 1,000 point plateau. Following his 1,000th point McDonald became the 14th player in league history to score 500 goals. He had one more goal left in his storied career that is remembered in Hockey's Hall of Fame: win the Stanley Cup. He did that on May 25, 1989.

McDonald came into that '88-'89 season just 12 points shy of 1,000. It took him 68 games to get there. At 36 years of age his career was coming to a close. The Flames had acquired Mark Hunter who was the heir apparent to McDonald. His playing time was cut down with the new kid in town, but he still found ice time. He just wasn't the same prolific scorer that he once was.

After spending time with the Toronto Maple Leafs and Colorado Rockies, McDonald came to the Flames via trade in 1981. At the time he was 28. He had enjoyed some great years, which included six seasons of 30 or more goals and 5 All Star appearances. In Calgary he set the franchise record for goals in a season when he scored 66 during the '82-'83 campaign and made another All Star appearance.  During that same season McDonald took home the Bill Masterton award for showing his perseverance, sportsmanship and dedication to hockey. McDonald took home the King Clancy award in '89 for showing leadership.

The true prize of that '88-'89 season was Lord Stanley's Cup. He knew that his best days were past him, but continued to play in hopes of winning hockey's most coveted prize. After 15 years in the league he knew how hard it was to reach the Finals much less win them. It took him 13 years to get to the Finals for the first time. The first trip came in 1986 when he was a 13 veteran. The Flames fell 4 games to 1 in the series; the hunger to win The Cup would not go away. While his goal totals continued to decline, the veteran leadership that McDonald brought to the Flames was irreplaceable. He would soon realize a lifelong dream.

The dream came true three years after the disappointing end to a great run. When McDonald and the Flames got another shot at a title they met the Canadiens once again. The Flames won the series in six games, and after many years of dreaming about the day he would hoist The Cup it was in his hands. He was now a champion and his career was complete. His #9 hangs in the rafters in Calgary, and in 1992 McDonald was inducted into the Hockey Hall of Fame where his tale will be told for generations to come.

Posted by Wade Forrester at 3:49 AM