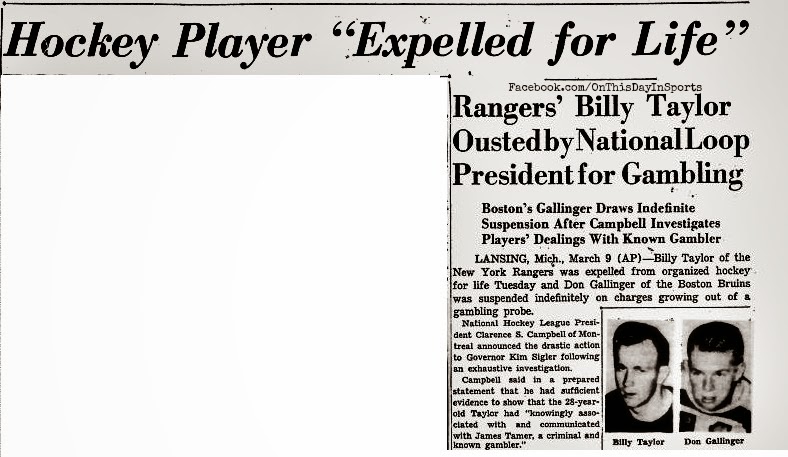 On March 9, 1948, NHL President Clarence Campbell announced that Billy Taylor from the New York Rangers and Don Gallinger from the Boston Bruins would be banned for life for gambling. Gallinger was just 28-years-old at the time of the suspension while Gallinger was just 22. Both of their playing careers would end that day. They were both reinstated in 1970 well after their days of being able to play professional hockey were over. Taylor did return to the NHL as a scout for the Pittsburgh Penguins, but Gallinger never did return to the league in any capacity.

Taylor broke into the league at 20 years of age. He showed great promise and was a part of a Stanley Cup Champion with the Toronto Maple Leafs in 1942. In September of '46 he was shipped to Detroit where he set the record for most assists in one game with seven. He joined the Gallinger and the Bruins in '48 via trade where he played in 39 games before being sent to the Rangers. He only played 2 games with the Rangers before the suspension that would change his hockey end his NHL career.

Gallinger was just 17 years old when he broke into the NHL, which made him one of the youngest players in league history. His star was quickly on the rise as he topped 20 goals or more in four out of his five years in the league. Then the star came crashing down as he was caught up in the gambling scandal.

When the news hit the wires Campbell claimed to have conclusive proof that Taylor was involved with a known criminal and gambler by the name of James Tamer, and that he had placed a bet against the Bruins on February 18th of that same year. Coincidentally he lost the bet, but it still cost him his career. Gallinger had also been associated with Tamer as well, which led to an indefinite suspension with the matter being investigated. Campbell did what he thought was necessary to preserve the integrity of the sport by suspending the both of them.

This was not the first gambling scandal to hit the world of hockey. In 1946, Babe Pratt of the Toronto Maple Leafs was suspended for gambling. He was reinstated after he had admitted to his mistakes and guaranteed it would not be a mistake that he would make again. Pratt was later inducted into the Hall of Fame. Taylor and Gallinger were not as fortunate. While Taylor chose to not fight the suspension, Gallinger denied any wrongdoing. Although, he did later admit to his indiscretions. For many years Gallinger fought to be reinstated. In his mind he did not feel that a life sentence was deserved for a mistake he had made when he was just 22 years old. When the ban was finally lifted in 1970 it was said that it gave him peace of mind. It is unfortunate that both of these men made the mistakes that they made, but we all are held accountable for our actions. This is a lesson that they learned the hard way.

I dug hard to find more about Billy Taylor without a lot of luck. I did find this short bio on the Hockey Hall of Fame's website: http://www.legendsofhockey.net/LegendsOfHockey/jsp/SearchPlayer.jsp?player=14508
The bio for Gallinger is much more detailed. However, they are both well worth a read: http://www.legendsofhockey.net/LegendsOfHockey/jsp/SearchPlayer.jsp?player=12673
Posted by Wade Forrester at 1:31 AM