On March 21, 1964, with a 98-83 win over the Duke Blue Devils, the UCLA Bruins were crowned National Champions. This was the first National Title for the unbeaten Bruins and the coach who became known as The Wizard of Westwood, John Wooden. It was a sign of things to come for the basketball program as they won the National Title nine more times over the next eleven seasons.

The game held at Municipal Auditorium in Kansas City had 10,864 on hand and a National audience tuned in. The 98 points scored by the Bruins also set an NCAA record for most points scored by a team in the tournament. The previous record was set by Lasalle, who scored 92 in 1954. 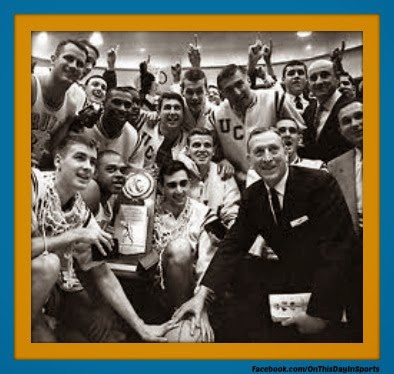 The Bruins were the shortest team in the field with no player taller than 6' 5", however, they were faster than the Blue Devils, and were led by guard Walt Hazzard's ball handling as they outpaced their opponent. The key to the victory came midway through the first half when UCLA found themselves trailing 30-27, they went to a press defense, and went on a 16 point run over the next three minutes and 51 seconds. After that run they were up 43-30. The Blue Devils never did get closer than 10 points after UCLA took control of the ballgame.

There were a variety of heroes on the Bruins squad: Gail Goodrich scored 27 points, Kenny Washington knocked down 26, Jack Hirsch scored 13, and Hazzard had eleven points to his credit. While Hazzard wasn't at the top of the points scored category, he had directed the show that brought the Bruins a title. He had dished off assist after assist before being fouled out with six minutes and fourteen seconds in the contest. Minutes later Hazzard celebrated with his teammates as a champion.

This was the beginning of one of the most legendary runs in sports history. The Bruins were just the third unbeaten team to win the National Title. To date, there have been 7 undefeated National Championship teams in basketball. The Wooden led UCLA Bruins own five of the seven spots on that list. It was a run of basketball college basketball dominance that will never be forgotten. Legendary.
Posted by Wade Forrester at 12:48 AM