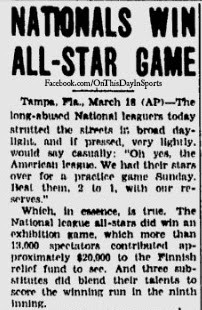 On March 17, 1940, a Spring Training  All Star game was held in Tampa, Florida. The game was a benefit that was being held to support the people of Finland, who had been attacked by the Soviet Union. The event drew a crowd of more than 13,000, and raised more than $20,000 for the Finnish Relief Fund. The Soviet invasion of Finland began in December of '39 and ended just a few days before this game took place. While it was simply an exhibition game, the players gave it their all, and put on a show for each and every soul in the crowd, as the National League prevailed over the American League 2-1.

While the Finnish flag flew at half mast more than 4,000 miles away in Helsinki, it flew high next to the Old Glory in Florida as the two squads prepared to play. Early that morning a Finnish freighter rolled into port in Tampa. One of the crew members who could read english saw that the game was being held in a newspaper. The captain along with  three other crew members each bought a tickets to show support for their country, while showing solidarity with the United States. It was the first game of baseball these men ever watched and they were in for a treat.

The pitching was tight, the fielding was spectacular, and it would take until the bottom of the ninth to decide a winner. Five National League hurlers held the American Leaguers to just 5 hits. Those five included: Paul Derringer, Kirby Higbie, Luke Hamlin, Bucky Walters, and Harry Gumbert. Men like Joltin Joe DiMaggio and Ted Williams tried to get a hit in vain as the pitchers overmatched them. DiMaggio put the A.L. squad up 1-0 in the second after picking up a walk, before his Yankees teammates Bill Dickey and Frankie Crosetti knocked him in with back-to-back singles. The National League evened things up in the fourth with an RBI off the bat of Giants outfielder Frank Demaree. From there, the pitchers on both sides would lock in and hold their opponents at bay. Then came the ninth. 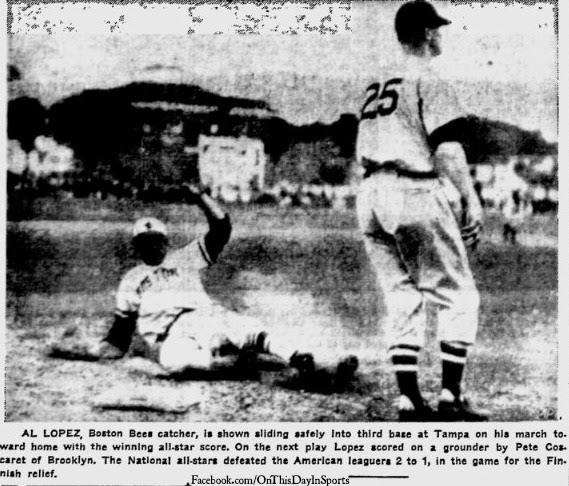 Headed into the bottom of the ninth the American League sent Bob Feller to the mound. The future Hall of Famer gave up a leadoff hit to Boston Bees catcher Al Lopez. St. Louis Cardinals centerfielder Terry Moore followed it up with a bunt that he dropped right in front of the plate, catcher Rollie Hemsley pounced on the ball and threw it to first base where Cleveland's Hal Trosky muffed the ball. Seeing the error, Lopez turned it on and rounded second and headed for third before the second baseman Bobby Doerr could retrieve the ball. The next man up was Brooklyn Dodgers second baseman Pete Coscarart, he shot a ball through short, and Lopez came trotting into home. The National League was victorious.

While this is a story about a ballgame, it is also a story about how people come together when they are needed most. It is an example of the human spirit prevailing even in the darkest of times. The conflict in Finland was one that seen families displaced, lives lost, and that same human spirit being brought to a place where it should not have to go. Unfortunately, war is a part of the human existence, and while we fight, we also stand together. That day in Florida, many men who would never meet those affected in Finland stood proud to support them. Each and every person who went through the turnstiles that day did the same.

You can read about the invasion here: http://en.wikipedia.org/wiki/Winter_War