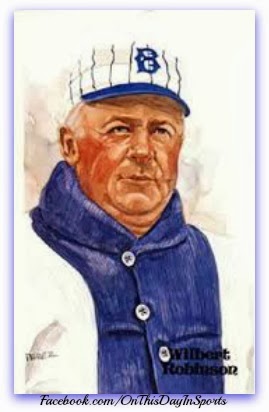 On March 13, 1915, Brooklyn Dodgers manager Wilbert Robinson was on the receiving end of a grapefruit that was dropped from a low-flying airplane. The plane flown by female aviator Ruth Law was supposed to drop a baseball into the waiting mitt of Robinson, but there was a problem; no one gave her a baseball. Her mechanic came to her with a grapefruit and told her to use it. As his players cleared out around him Law came flying over, Robinson had his mitt up in the air waiting for the baseball, then Law dropped the grapefruit right on target. Or maybe a hair off of the target as it hit Robinson in the chest and knocked him to the ground. Not knowing that it was a grapefruit, a shocked and dazed Robinson felt the liquid upon his face and thought he had been killed.

With his players busting up laughing around him, Robinson quickly realized that it was not his blood. The man who was affectionately known as Uncle Robbie went from stunned to angry in a matter of minutes. The 52-year-old skipper soon got over it and laughed along with his team about the stunt.

This fact was one that I did not truly believe at first. As time marches on some tales become spun into something much bigger than what they actually were. As I looked into it, I not only found out that it was true, but the story of Ruth Law was an intriguing one to say the least. While looking through newspaper archives I ran across an interview with Mrs. Law that was published in the Milwaukee Journal in 1959. She is perhaps the most interesting part of the story to me. As she paved her own path in what was a mans world at the time. The day that she dropped the grapefruit, she hardly knew anything when it come to the world of baseball, she just happened to be in the area doing other stunts. As it turned out that stunt would forever link her to the sport she did not know too much about.

Here is the interview from the Milwaukee Journal that was mentioned earlier:
http://news.google.com/newspapers?id=ofApAAAAIBAJ&sjid=uSUEAAAAIBAJ&pg=7142%2C4709816
There are many other websites and publications about her life out there as well.