On March 27, 1990, the New York Rangers ended a 48-year NHL title drought when they clinched the Patrick Division title with a 7-4 victory over the Nordiques in Quebec. The Rangers found themselves trailing 4-2 as they headed into the third period, then rallied with 5 goals in less than 10 minutes as they laid claim to the division crown for the first time since 1942. 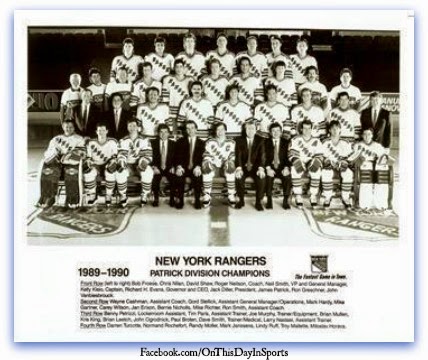 The rally started with a powerplay goal from James Patrick 5 minutes and 27 seconds into the third, as he blasted a 45 foot slapshot past the Nordiques netminder Ron Tugnutt. Less than three minutes later Brian Mullen tied it up with another powerplay goal. Mike Gartner who had been acquired at the trade deadline put the Rangers ahead 5-4 with a goal at the 9:10 mark. The squad from Quebec scored two goals before the Rangers, John Ogrodnick answered back with a goal at the 11:26 mark, then Paul Broten scored the 7th Rangers goal capped things off with a little under 5 minutes to go.

The division crown that had evaded them for so long was finally theirs. After the game, ex-Rangers
Michel Petit and Guy Lafleur skated over to the New York bench to congratulate their former teammates. The Rangers coach Roger Neilson, was also congratulated by the coach of the Nordiques, Michel Bergeron who had been fired as the Rangers coach one year before. When Neilson spoke after the game he said "I seen a lot of happy faces in the dressing room after the game tonight." The coach went onto say "We wanted to do it for ourselves and the players came out flying. You can't beat scoring five goals in the the third period."

Unfortunately for Neilson, and the Rangers, they would be knocked out in the second round of the playoffs. With Neilson at the helm they followed up the division winning season with a second place finish the following season, then returned to the top of the division after a very successful '91-'92 campaign. The next year was a struggle for the Rangers and Neilson was a casualty. He lost his job in January of '93, and the team would end up missing the playoffs. One season later, under new head coach Mike Keenan the Rangers held Lord Stanley's Cup high. It had been 54 years since they had last held the cup.
Posted by Wade Forrester at 12:47 AM