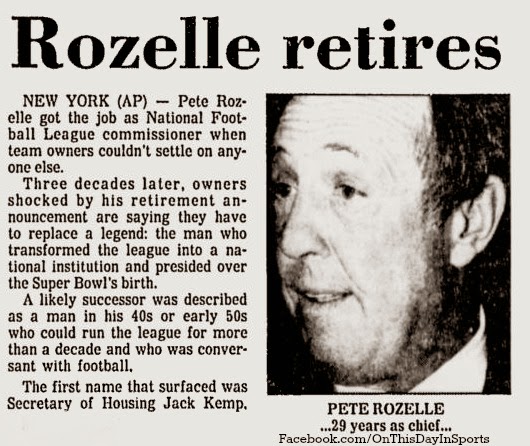 On March 22, 1989, Pete Rozelle announced that he would be retiring from his post as Commissioner of the NFL. Rozelle had been a the helm for wince 1960, and was key in transforming the league into what it is today. Among Rozelle's accomplishments were a successful revenue sharing plan, the AFL/NFL merger, and the transformation of the Super Bowl into a one of the most watched events in all of sports.

During his press conference the 63-year-old Rozelle broke down and cried three times as he explained why he made the decision. After he spoke with those closest to him, he talked with the owners, then faced the press. With tears in his eyes he said "It's been a great 30 years. I've been fortunate in everything I've done. I want to be able to and do other things." Most of the owners were still stunned by the news as they had only ten minutes between their talk and the official announcement. When Wellington Mara, the owner of the New York Giants spoke about the meeting between the owners and the commish he said "There was absolute quiet. You could hear a pin drop. Then everyone stood and applauded the man who had helped turn the NFL into a true powerhouse in the world of sports.

Even Al Davis shook his hand after the announcement. Rozelle and Davis had been involved in bitter legal battle after Davis decided to move his Raiders to Los Angeles. But they had settled the lawsuit and made peace between each other. When Davis spoke of the commissioner he said "Pete leaves a legacy. He dominated his profession." The Raiders owner went onto say "There was always an admiration. Even a little bit of love and emotion. Of course, I can't speak for him. It just so happened that we got caught in our Vietnam affair for the last 10 years. But I think it is all behind us now." It seems that the old battle wounds had healed between the two.

The press conference was an emotional one that saw each member of the press corp stand and applaud after Rozelle was done speaking. The next order of business was who would be the man to replace the commissioner. Rozelle promised to stay in office until his successor was named. A committee was formed and the search began. When the search was over Paul Tagliabue was named the next commissioner of the NFL. 228 days after Rozelle made his announcement, Tagliabue took office. An era had come to an end.
Posted by Wade Forrester at 12:07 AM