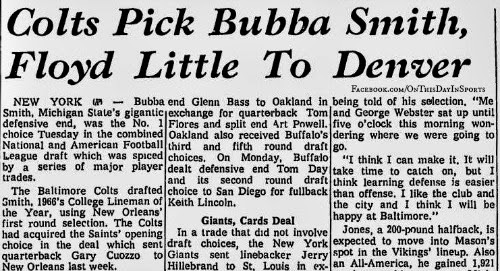 On March 14, 1967, the first common NFL-AFL common draft was held with the Baltimore Colts taking Bubba Smith out of Michigan State with the #1 pick. Smith would go onto have a nine year career in the NFL that included a Super Bowl ring and two Pro Bowl appearances. There were many other notable picks in this draft as the NFL and the AFL had come together to form what would turn into a powerhouse in the World of Sports.

The Colts landed the #1 pick via trade. They sent quarterback Gary Cuozzo to the Saints for the pick. Cuozzo spent four years backing up Johnny Unitas. After an injury to Unitas led to playing time for the backup QB someone in the newly christened Saints organization thought he should be the guy at the helm of their ship. That trade made Cuozzo the first ever starting quarterback in Saints history. That job didn't last long. In fact, it was one and done in New Orleans for the quarterback. After that inaugural season the Saints dealt him to the Minnesota Vikings. After a four years in Minnesota he was dealt to the St. Louis Cardinals where his career came to a close after one season in the Gateway City. Needless to say, the deal the Colts made was a good one as Smith spent the five years with the Colts and helped them achieve the Super Bowl victory in 1970 as well his Pro Bowl appearances in '70 and '71.

That '67 draft saw its fair share of trades. The Minnesota Vikings were very active when it came to making deals. They had acquired the #2 pick by trading future Hall of Famer Fran Tarkenton to the Giants. With that pick they took running back Clint Jones out of Michigan State. After taking another Michigan State product with the eighth pick, the Vikings hit big when they took Notre Dame defensive tackle Alan Page with the 15th pick. Page was an anchor on the defensive line in Minnesota for 12 years. During those 12 years he appeared in 9 Pro Bowls and helped guide the Vikings to four NFC titles. After being put on waivers in 1978, the Chicago Bears claimed him, which is where he spent the last few years of his career The last stop in Alan Page's football career was in Canton, Ohio at the Pro Football Hall of Fame.

There were several other men out of that '67 draft who would find their spot in Canton as well. UCLA quarterback Bob Griese was taken fourth by the Miami Dolphins, the Denver Broncos grabbed Syracuse running back Floyd Little sixth, and the Oakland Raiders grabbed guard Gene Upshaw out if Texas A&M-Kingsville. Now that covers the players who made it to the Hall of Fame that were selected in the first round; the later rounds saw four more future Hall of Famers picked. The first two came out of the second round,  as the Detroit Lions landed Jackson State defensive back Lem Barney with the 34th overall pick and the Kansas City Chiefs picking up a linebacker out of Texas Southern by the name of Willie Lanier with the 50th overall pick. The diamonds in the proverbial rough came much later. In the seventh round the Dallas Cowboys took Fort Valley State tackle Rayfield Wright 182nd overall, then in the ninth round the Houston Oilers picked up Prairie View defensive back Ken Houston 214th overall.

445 players were picked during that '67 draft. Eight of them made it to the Hall of Fame. Each of them should hold pride in the fact that they were simply picked by an NFL team. Even if they didn't make it past camp they were good enough to be on the radar of an NFL franchise. On draft day each and every player has a chance of one day being considered one of the greatest to ever play the game. If they don't make it to the hallowed halls in Canton it does not mark them as a failure as many men have strapped on a set of pads and helped their team win many games that are not earmarked as Hall of Famers. They were part of a team and without them that team would be missing a key piece. It does not matter if a player spends his career as a special teams guy or a backup quarterback who wears a headset the majority of the time. The fact that they are where they are makes them a part of an elite bunch of men who have made it to the highest level.

You can view the complete draft list here: http://www.pro-football-reference.com/years/1967/draft.htm