March 23, 1994: The Great One Surpasses Gordie Howe In the NHL's All Time Scoring Department 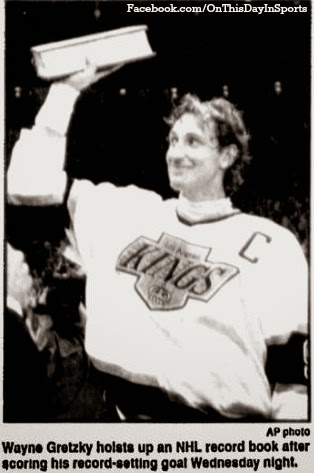 On March 23, 1994, Wayne Gretzky attained hockey's most coveted record when he scored his 802nd goal to become the all-time goals leader in NHL history. Unfortunately for The Great One, his Los Angeles Kings fell to the Vancouver Canucks 6-3 in front of a home crowd in Inglewood, California. However, it was a night to be remembered as he surpassed the legendary Gordie Howe on the all-time goals scored list.

#802 was setup by Mart McSorley and came during the second period when he snuck one past the Vancouver goalie Kirk McLean to even things up at 2-2. The crowd of more than 16,000 gave Gretzky a long ovation and chanted his name as they celebrated the milestone. Gretzky finished his career with 894 goals. To date, no other player has yet to reach the 800 goal plateau.

Gretzky had scored his first goal against the Vancouver Canucks also. It was 15 years before the record setting goal and he had now come full circle. After reaching 802, a ten-minute ceremony was held to honor him. When he spoke after the game he said "I don't think I ever had a moment where I felt like I did at that moment." He truly was The Greatest to ever lace up a pair of skates.

Today, Gretzky holds or shares 61 different NHL records. The goals record is a record that might just stand the test of time. The same can be said for many of the records that he holds, however, the goals record is the cream of the crop. I don't think it would be a stretch to say "There will never be another one like the one who wore the number 99."

This is a really cool list called 99 Great Moments: http://www.gretzky.com/hockey/great_moments.php
Posted by Wade Forrester at 3:27 AM