On March 29, 1982, trailing the Georgetown Hoyas by one point with 15 seconds to go in the National Title game, freshman standout Michael Jordan nailed a 18-foot jump shot to put his North Carolina Tar Heels up 63-62. The Tar Heels held onto that lead, and 15 seconds later they were crowned National Champions. The game was one for the ages, as the Hoyas were led by another freshman by the name of Patrick Ewing, while the Tar Heels had James Worthy who matched Ewing dunk for dunk as they battled for the title.

Besides the stars already named, North Carolina also had Sam Perkins on the floor, and Georgetown had Eric "Sleepy" Floyd on their side. Each and every player on both squads gave it their all, in what was one of, if not the hardest fought battles of that season. Before the game Ewing had been criticized for his lack of defensive play. He proved the naysayers wrong as he knocked down 23 points, grabbed 11 rebounds, and had three steals, and two blocked shots. The coach of the Tar Heels, Dean Smith was even amazed by Ewing's play. Luckily for Smith, he had a few amazing players of his own. Most notably James Worthy who knocked down 28 points on his way to winning the game's MVP award. 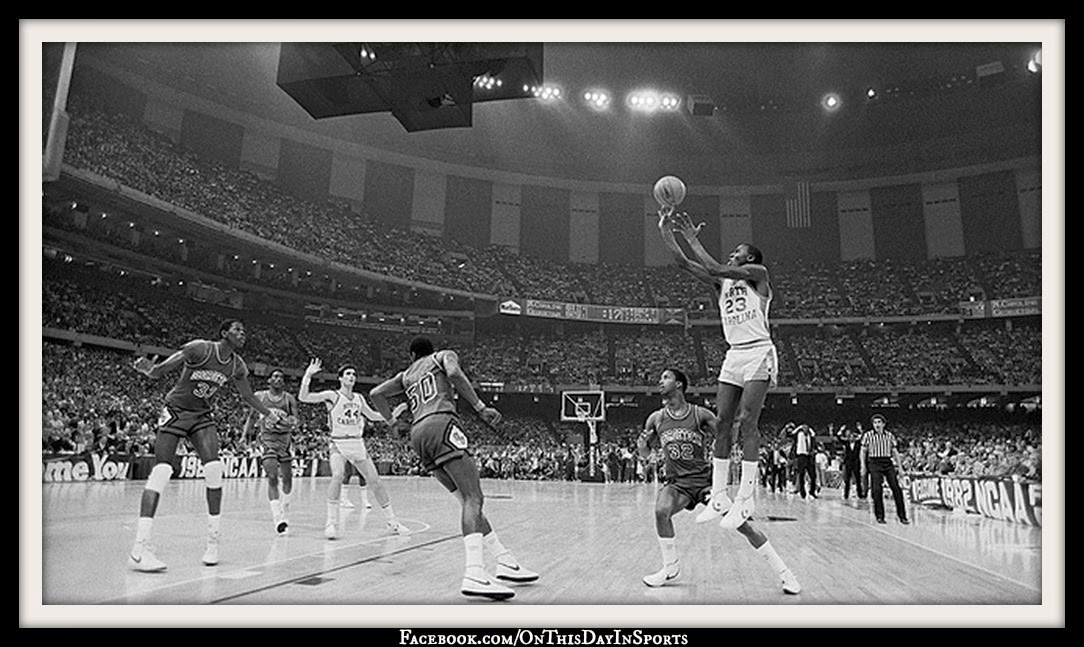 Georgetown led 32-31 at the half. When the teams returned to the floor a seesaw battle ensued that  never had either team leading by more than four points. The Hoyas took the lead for the final time with just 57 ticks left on the clock on a short jumper by Floyd. Dean Smith called a timeout to set up the next play, and told Jordan if he had an open shot to take it. Jordan heard him loud and clear, and with time winding down he found his opening and took the shot that brought North Carolina their second title in men's basketball. Although there was 15 seconds to go, which meant Georgetown had more than enough time to take the lead right back. However, guard Fred Brown thought he saw his teammate Eric Smith in peripheral vision and fired a pass that was intercepted by Worthy. The Tar Heels were champions. It was the first title for the program since 1957. They have returned to the top of the college basketball mountain three more times since that day in 1982.

Worthy's 28 points led the Tar Heels, Jordan knocked down 16, and Sam Perkins had 10 under his belt. On the Georgetown side of the ball, Ewing's 28 led the way, it was followed up by 18 points for Floyd, and another 14 by Eric Smith. You can check out the entire box score here: http://www.cbssports.com/collegebasketball/ncaa-tournament/history/yearbyyear/1982