On February 28, 1960, down 4-3 headed into the third period of the Gold Medal contest against Czechoslovakia the United States hockey team exploded for six goals on the way to a 9-4 victory in Squaw Valley California. This was the first ever Gold Medal for the United States in hockey and is often referred to as the "Forgotten Miracle."

The day before it took everything that the United States had to topple the Soviet Union squad 3-2. Solly" Sologubov stopped by the American locker room and told the team to try using oxygen to offset the mile-high air of Squaw Valley. The Russian captain had to do quite a bit of convincing before the United States team captain Jack Kirrane looked at Solly and said "Okay Solly bring it in." The Russian then proceeded to roll a cart with a tank into the room, and with the exception of Bill Cleary each of the American took a few breaths of oxygen before they went out and destroyed their opponent.
Coming off such a victory had the Americans searching for that extra gear it would take to win the top prize. They skated to a 3-3 tie after one period, then fell behind 4-3 after two. While in sitting with their heads down in the locker room the captain of the Soviet squad Nikolai " 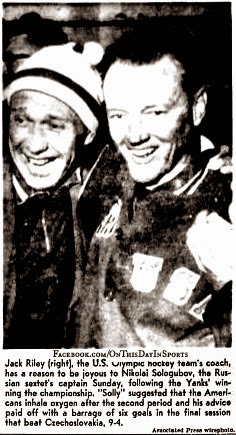 A 24-year-old carpenter from Warroad, Minnesota by the name of Roger Christian was the biggest star of the third period as he three of his four goals in that final frame. 5 minutes and 59 seconds into the third period Christain sent a 20 foot shot past the Czech netminder to tie it, then at the 7:40 mark Bob Clearly put the Americans in front 5-4 as he cleaned up a rebound. At the 11:01 mark a penalty was called against Czechoslovakia which led to three goals in a 67 second span. Those goals were scored by Bob Cleary, Christian, and Bob's brother Bill. Weldon Olson picked up the last goal for the Americans as the Czechoslovakian's sat stunned by the offensive outburst. While we all celebrate the Miracle on Ice in 1980 this game was a miracle comeback in itself. It would take 20 years for the United States to reach the top of that mountain again. With the 1980 victory being well publicized it is one that is sure to never be forgotten. With coverage being much different two decades earlier the 1960 United States hockey team never has gotten the recognition that is deserved. Today they do.

Posted by Wade Forrester at 2:33 AM