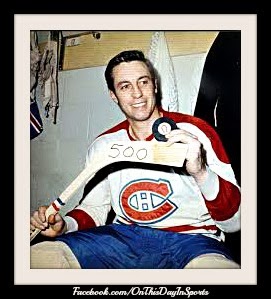 On February 11, 1971, Montreal Canadiens legend Jean Beliveau recorded the 500th goal of his career in a 6-2 thrashing of the Minnesota North Stars. Beliveau came into the contest just three goals away from reaching the magic number and he wasted no time getting there. Beliveau scored two goals in the first and added a hat trick to the story with a goal at the 6 minute and 42 second mark in the third. Beliveau was just the fourth player the NHL history to reach the 500 goal plateau.

The 39-year-old came into the contest knowing he was on the brink of 500, but said he hardly thought about it until he scored his second goal of the night.  The third goal and the 500th of his career was assisted by rookie right winger Phil Roberto and veteran Frank Mahovlich. Roberto, just 21 years of age, had grown up watching Mahovlich and Beliveau play. After acknowledging they were heroes of his he said  "I'd never dream I would get to play on a line with them. And, as for assisting on Jean's 500th goal, it's just too much. It's terrific."  Grinning from ear-to-ear, a happy Beliveau posed with his stick and held up the puck, before being presented with a Canadiens jersey that had the #500 across the back.

This would be the last season in the career of Jean Beliveau. He spent 18 years on the ice, all in a Canadiens uniform. During those 18 years, he played in 1,125 games, his name was etched on the Stanley Cup 10 times, scored a total of 507 goals, along with 712 assists to bring his point total to 1,219. He led the league in scoring in '56, that same year he took home the Hart Trophy as the league's MVP, it was an award he would win again in 1964.  Just one year after his career came to a close Beliveau was elected into the Hockey Hall of Fame.
Posted by Wade Forrester at 1:41 AM