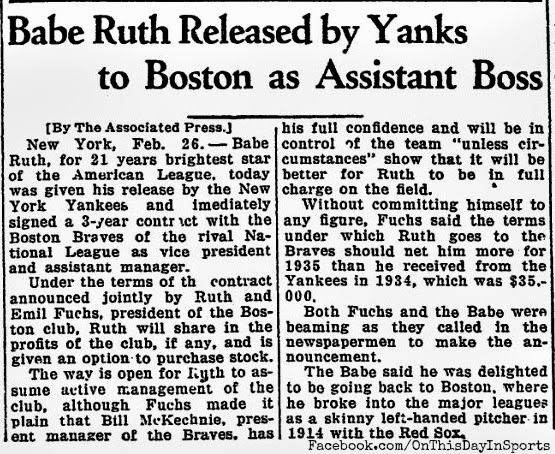 On February 26, 1935, the New York Yankees released Babe Ruth. On the same day the legendary slugger signed a one-year contract with the Boston Braves. It marked the end of a baseball era in New York where Ruth had forged a career that would reach almost mythical proportions. The 40-year-old Ruth, who had been sold to the Yankees from the Boston Red Sox in 1920, finished his American League career with 708 home runs, 659 of those came wearing the Yankees pinstripes. Over his 15 years in New York he helped lead to seven A.L. pennants and 4 World Series titles. He would play just 28 games with the Braves before a dispute with the president of the club Emil Fuchs led to retirement. With a stroke of a pen one of the finest eras in the history of baseball came to an end.

His signing with the Braves came with stock options, a vice president title, as well as the assistant manager title. Managing was something Ruth yearned for and the Braves skipper Bill McKechnie was a man who he held great admiration for. However, things did not work out the way he had expected. The initial deal called for 3 years. Excited for the chance to extend his career in the town where it all began, Ruth declared that he would play in at least 100 games with the club and his expectations were high. He acknowledged that the National League had great pitching with names like Dean and Hubbell, but was ready for the challenge. He came into it thinking he could play at least two years and had high hope for a third as well.

Unfortunately, things went south before the regular season even began. The Braves had drawn record crowds during Spring Training and Ruth expected a portion of the gate receipts; Fuchs thought otherwise. Once the season was underway Ruth struggled at the plate, was a bit dinged up, and was simply not reaching expectations. This coupled with the tension between the club owner led to him leaving the sport that made him a household name. Although, Ruth stated that the straw that broke the camel's back was when Fuchs refused his request to go watch the French Ocean Liner Normandie come into port in New York. At the time Ruth was nursing a sore knee and saw no reason why that the club president would refuse his request. Saying that he felt as if Fuchs had double crossed him he quit. He was given an unconditional release following his announcement, but no other major league club expressed interest in him as either a player or a manager. It was not a storybook ending for the man who had given his life to the game. 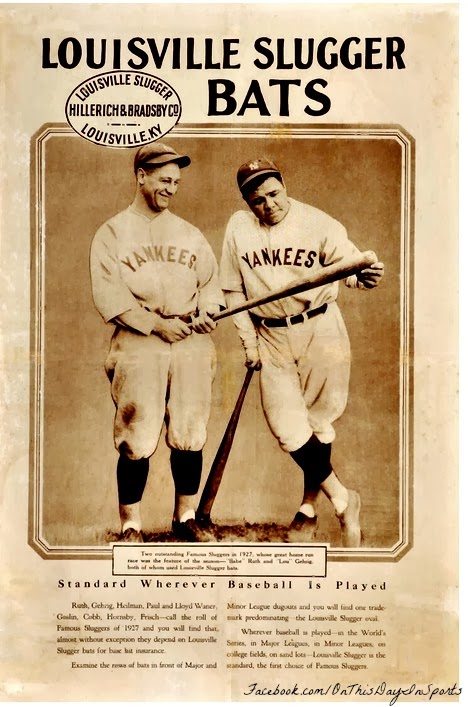 It might not have been the storybook ending, but the story that came before it is what counts the most. That story is one that most men can only dream of. Babe Ruth lived it. During that story Ruth led the league in home runs 12 times, RBI's 6 times, took home the batting title in '24. and  was a World Series Champion seven times. As a pitcher he had recorded a 94-46 record; only 5 of those wins came in a Yankees uniform. In 1916 he recorded nine shutouts which tied an A.L. record. Once he moved on to New York he focused on his abilities as a slugger and by doing so he became one of the finest sluggers to ever play the game. An inaugural member of the Baseball Hall of Fame, Ruth will forever be remembered as not only one of its greatest players, but as someone who helped transform the game into America's National Pastime.
Posted by Wade Forrester at 12:23 AM