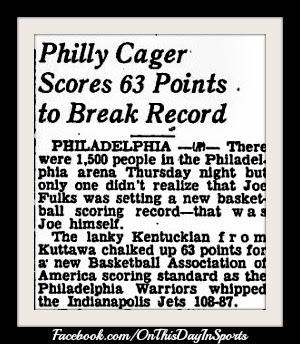 On February 10, 1949, in front of a home crowd in Philadelphia, Warriors forward "Jumping Joe" Fulks set an NBA record with a 63-point-performance in a 108-87 win over the Indianapolis Jets. The 63-point-effort shattered the previous mark of 49 that had been set by George Mikan of the Minneapolis Lakers in January of that same year. Fulks' record would stand until November 8, 1959 when Elgin Baylor scored 64 for the Minneapolis Lakers. The current record of 100 points in one game was set by Wilt Chamberlain in 1962, that is a record that might just stand the test of time.

Only 1,500 fans witnessed the history making performance. Those fans took home a memory that would
last a lifetime. Fulks nailed 27 of 56 from the floor, then added nine more points with free throws. The newspapers of the day said that Fulks was the only man in the arena that didn't realize he was on a record breaking pace. He knocked down 30 points in the first half which surpassed a record that had been set by Carl Braun of the New York Knickerbockers, then with the crowd yelling "shoot! shoot!! shoot!!!" Fulk knocked down 33 more. Fulks only realized he had broken the record late in the game, when his coach Eddie Gottlieb pulled him to the side and told him to hang back because he was sitting on 59.The 27 field goals was nine better than a record that was shared by Mikan and Braun. It was said that Fulks made goals with every kind of shot. He dropped one-handers and two-handers from the side, underneath and from the outside. When Fulks left the game with one minute to play the Jets players cheered him and their coach Burl Friddle rushed over to shake his hand. 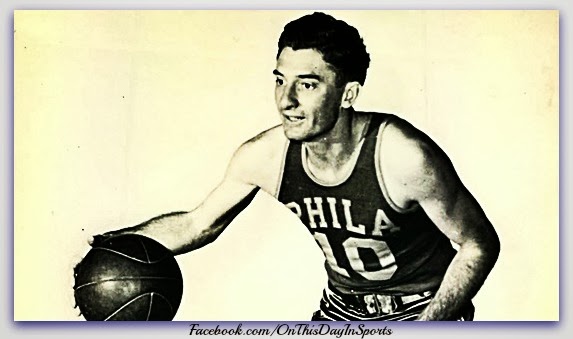 Jumping Joe played 8 years of professional basketball. He, like many other athletes of the era, served in the military during World War II. Because of the war, his career at the professional level didn't begin until he was 25 years old. Not to mention the BAA (which would become the NBA) was still finding a foothold in the world of sports. While serving he played with a Marines All-Star squad, then when he returned stateside he played with a touring team called the All-Star Leathernecks. He soon caught the attention of the professional syndicate and found a contract in his hands to play with the Warriors. In his eight years as a professional Fulks scored 8,003 points, grabbed 1,379 rebounds, and dished out 587 assists. He is considered an innovator of the game who revolutionized the jump shot. He is recognized as one of the best to ever play the game at the Naismith Basketball Hall of Fame in Springfield, Massachusetts.

If you would like to learn more about the Hall of Fame career of Joe Fulks check this out: http://www.nba.com/history/legends/joe-fulks/index.html

And you can check out his career stats here: http://www.basketball-reference.com/players/f/fulksjo01.html