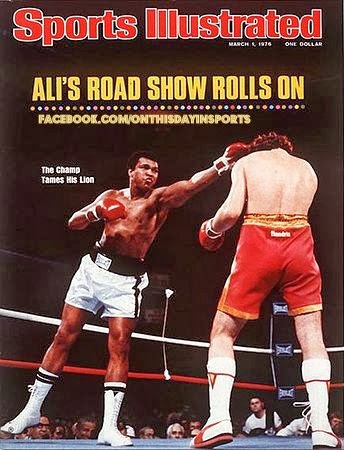 On February 20, 1976, in front of a sellout crowd at the Coliseo Roberto Clemente in San Juan Puerto Rico, Muhammad Ali won the 50th fight of his career, with a 5th round knockout of Belgian born fighter Jean-Pierre Coopman.

The fight was a one-sided affair as Ali dominated Coopman from start to finish. Ali came into the contest weighing in at 226; 20 pounds heavier than his opponent.  That along with a speed advantage proved to be too much for Coopman. The Belgian threw plenty of punches, but only connected with a few, and those punches he landed were ineffective. All the while, Ali stood flat-footed and opened up with a flurry of punches when he felt the urge. It was a David and Goliath fight, and David forgot to bring his slingshot.

Late in the fifth Ali finished toying with his opponent and landed a vicious uppercut that knocked Coopman out cold. After the referee was done counting him out the champ helped drag his dazed opponent to his corner. The Sports Illustrated cover that featured the two fighters came with a cover caption "The Champ Tames His Lion" this was in reference to Coopman's nickname "The Lion of Flanders." The fight was hardly comparable to taming a lion for Ali. It would have been more comparable to taming a kitten for the man who is widely considered the greatest of all time.
\
Watch the fight here: https://www.youtube.com/watch?v=ItzHGY4rfmA