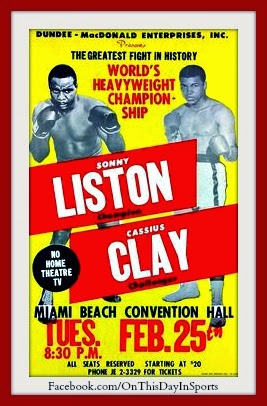 On February  25, 1964, a brash young fighter by the name of Cassius Clay surprised the world by beating Sonny Liston with a technical knockout in Miami Beach, Florida. Liston came into the bout a 7 to 1 favorite, but the 22-year-old Olympic Gold Medalist came into it with a confidence that could be matched by no other. In the weeks leading up to the fight Ali proclaimed that he would float like a butterfly and sting like a bee. He did exactly that. He danced around Liston and landed punch after punch on his way to becoming the World Heavyweight Champion.

There was a reason that Liston was considered a clear-cut favorite. He was an ex-convict who struck fear in those who faced him with a devastating left-jab and a stare that would frighten his opponent before a punch was thrown. Whoever chose to challenge Liston would usually end up face down on the canvas as the referee counted him out. Liston had taken the title from Patterson in 1962. Patterson attempted to regain the crown in '63, but Patterson was no match for him as he took him out with a first round TKO. Next man up... Cassius Clay

Being just 22-years-old nobody knew that Clay would become one of, if not the greatest boxer of all-time. Liston's reputation preceded him while Clay was just beginning to build his reputation. His reputation would build quickly as he was very vocal in believing he could beat Liston. Clay even proclaimed he would knock the champ out in eight rounds, then even had a bus painted with the proclamation down the side. Clay taunted his opponent with insults and would continue to do so until the bell rang on the day of the fight.

When the fight finally began, Clay proved he was more than just a young kid running his mouth. He danced around and unleashed a fury of punches that would lead to victory. Liston never did any damage to his opponent while the punches that Clay landed did evident damage as Liston had a cut under his left eye as well as a cut on the cheek. Before the fourth round a desperate Liston had one of his cornermen rub a compound on his gloves. Liston then was able to get the compound in the eyes of Clay, which caused his eyes to burn and his vision to blur. In turn, Liston was able to unleash his own bit of punishment, but Clay was able to hold him off until the bell rang on the kid. After the round Clay's trainer Angelo Dundee was able help clear things up by sponging his eyes out before Clay when back to work. When he did get back to work he held his own until Liston claimed that he had suffered a shoulder injury. He said the injury happened in the first round and it progressively got worse as the fight continued. After the sixth round was complete, Liston refused to come back out of his corner. The injury was too much for Liston to handle and Clay was the champ.

After the fight a jubilant Clay said "You guys wouldn't believe in me but I meant it all along when I said Liston will go down in eight and I will prove I'm great. Now I'm the greatest." A defiant Liston said "He doesn't belong in the same ring with me. He beat me because I was hurt and Clay didn't do the hurting. I did it myself so I can't blame him. But next time around, I'll get him for sure." Liston was wrong. When they met again a little over a year later the boxer who had began calling himself Muhammad Ali would beat Liston again. He was the greatest.

Watch the fight in its entirety here: https://www.youtube.com/watch?v=OezriPEepZs
Posted by Wade Forrester at 3:07 AM