On February 4, 1969, Al Davis announced that John Madden would be the next head coach of the Oakland Raiders. Madden had worked his way up from the college ranks, to a spot as an assistant to John Rauch on the Raiders coaching staff. In 1967, Madden was the linebackers coach and helped guide the team to the Super Bowl with Rauch at the helm. The choice to hire Madden came after Rauch was lured away by the Buffalo Bills. It turned out to be a great choice by Davis as Madden spent the next 10 years as the Raiders head coach, going 103-32-7. He also guided the Raiders to Super Bowl glory in '76 and will always be considered a legend. Not only in Raider country, but among the entire football community as well. 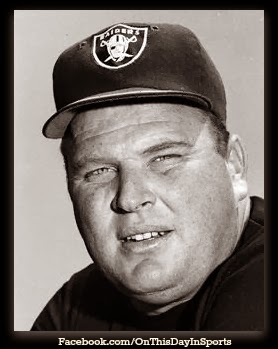 Madden's career in football began as a player on the gridiron, he played at Oregon, College of San Mateo, before finishing up at Cal Poly in San Luis Obispo, California where he played both defense and offense. After a knee injury dashed his hopes of a career in the NFL, he soon turned his focus to coaching. In 1960, he found himself as an assistant at Hancock College in Santa Maria which led to his first head coaching position with the school just two years later.  In 1963, Madden caught the eye of San Diego State's Don Coryell, who helped mold him into the coach he was going to become. Then the Raiders came knocking at the door in '67 and the beginning of an era was about to begin.

After he showed that he could lead as an assistant, Al Davis looked to Madden as an obvious choice. Davis had a history of promoting within the organization which is how Rauch landed the position in 1966. Rauch had coached under Davis, then found himself guiding the ship after Davis was promoted to commissioner of the AFL. At 32 years of age, Madden was about to become the youngest head coach that the league had ever seen. Before reaching the top of the mountain, Madden and the Raiders had their share of success and failure. They reached the AFC Championship games five times in seven years, but were not able to get past it and found themselves with the dreaded "can't win the big game" label. That all changed after posting a 13-1 regular season in '76, then toppled the New England Patriots and Pittsburgh Steelers in the playoffs before pummeling the Minnesota Vikings  32-14 in Super Bowl XI. Following the Super Bowl victory, Madden guided the Raiders back to the AFC Championship game in '77. After the team failed to make the playoffs in '78 he decided to retire. The biggest factor behind the decision to retire, was an ulcer that he had battled throughout the '77 season, it carried over into '78 as well. The time had come to take a break from the high-stress job of guiding a professional football team. 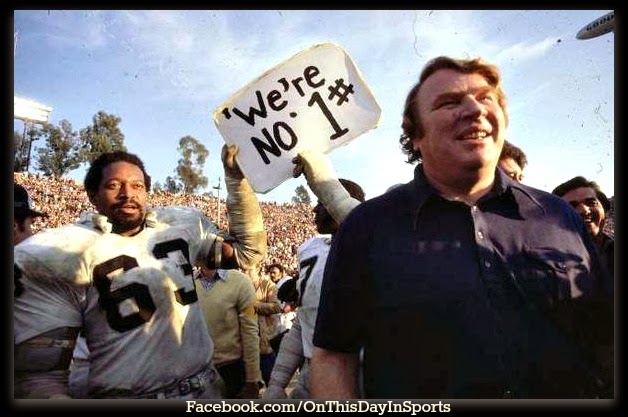 In his 10 years at the helm, Madden had went from an up an coming assistant, to one of the best coaches of the era. His record of more than 100 wins and only 32 losses speaks for itself. While this generation will remember him for the video games that has his name in the title, or all the Sunday's we listened to him call games on television, the generation before will always remember the coaching career that led him to each of those things.

Madden announced his retirement from coaching  in January of '79. A tearful Madden said "Things like this are easy to talk about and hard to do." Early in the press conference he said that he would not be returning to coaching and reiterated when he said  "I'm an Oakland Raider. I started with them when I was young and I will always be an Oakland Raider." He never did return to the coaching ranks again. Instead, he joined the ranks of the broadcasters that bring the fans the games on Sunday's. His days in Oakland might have come to a close but he would always be a Raider. In 2006, Madden was forever immortalized in Pro Football's Hall of Fame. It had been nearly 40 years since Al Davis put out a press release that told the world a little known assistant by the name of John Madden was going to be the head coach of the Oakland Raiders.