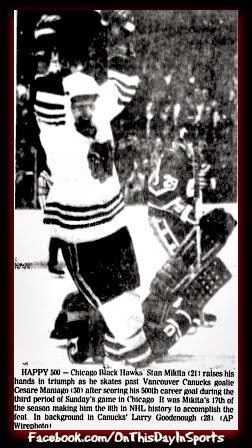 On February 27, 1977, Chicago Blackhawks legend Stan Mikita became the eighth player in NHL history to record 500 goals in his career. Unfortunately, his Hawks fell to the Vancouver Canucks on home ice, however, the milestone was still celebrated by Mikita, his teammates, and everyone in attendance. The historic goal came during the third period when he fired the puck past Vancouver netminder Cesare Maniago. Mikita lit the lamp 41 more times before his Hall of Fame career came to an end.

With many historic milestones in sports we often hear that the player feels that the weight of the world is on his shoulders. Stan Mikita felt the same way. Once he reached 499 he knew that everyone from his teammates to the fans were waiting for him to score his 500th. The day he scored the historic marker he arrived early, took a nap, and watched a little bit of golf on tv. He was simply trying to work with a clear head and it would prove to be an effective way to go about things.

Once the game was underway the fans in the stands cheered each and every time the puck would touch Mikita's stick as they anticipated the history making moment. They waited and waited and with time winding down it seemed like they might have to wait for history to be made on another night. Then it came. He lit the lamp just six minutes and four seconds to go in the contest, and the wait had come to an end. While the Canucks held the Hawks at bay and won the game, a weight had been lifted and Mikita was happy that he was able to score his 500th goal in front of his hometown fans.

Along with his 541 goals Mikita had 926 assists to bring his points total to 1,467. Regarded as one of the best centers of his time, Mikita led the league in scoring four times, won two MVP awards, appeared in nine all star games, and etched his name on Lord Stanley's Cup once. Forever a legend, Mikita was inducted into Hockey's Hall of Fame in 1983.

You can watch Mikita score his 500th here: http://video.nhl.com/videocenter/console?id=115049

If you would like to read more about the life and times of Stan Mikita check this out: http://www.legendsofhockey.net/LegendsOfHockey/jsp/LegendsMember.jsp?mem=p198303&type=Player&page=bio&list=

You can also view his career numbers along with a list of accomplishments here: http://www.hockey-reference.com/players/m/mikitst01.html
Posted by Wade Forrester at 1:07 AM