On February 7, 1949, "Joltin Joe" DiMaggio became the first player in the history of the American League to crack six figures when he inked a one year deal with the New York Yankees that would pay him $100,000. The first player to sign for six figures was Hank Greenberg in '47, when he inked a deal with the Pirates that paid him $100,000 The year before the Yankee Clipper had hit .320, parked a league leading 39 balls over the wall, and also led the league with 155 RBI's, while finishing second in the MVP voting. The raise in pay was substantial as DiMaggio had made $65,000 the year before. By today's standards DiMaggio's $100,000 would be worth right around $980,000. While it is a far cry from the baseball contracts we see today, it was a historic moment in the career of DiMaggio and the Yankees organization.

In an article that was published in the Sporting News in 1949, Joe was asked what was the lowest salary he had ever made, DiMaggio told the reporter that he had once peeled oranges at a citrus farm in California for $3.50 a day. Apparently, Joe only made the $3.50 because he quit after his first day. He would eventually find his way to the diamond. It all began with his brother Vince's team, the San Francisco Seals of the Pacific Coast League, needing a shortstop. In October of 1932 he found himself on the field with the Seals and a legendary career was about to begin. DiMaggio made a name for himself in San Fran by putting together a 61 game hitting-streak, then leading the Seals to a title win in 1935. An accident jumping off a jitney bus one year earlier nearly sidelined his career altogether, he came away from it with an injured knee, and Yankees offer to buy the young slugger dropped from $100,000 to $50,000. At either price it would have been money well spent, but the Yankees walked away from that one smelling like roses. The first contract that DiMaggio signed with the Yankees was reported to be for  $7,500. By today's standards, it would have been the equivalent to a little more than $125,000, nice little chunk of change for a 21-year-old kid. Good times were on the way. 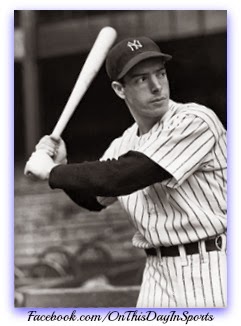 From 1936 to 1942, DiMaggio's became one of the brightest shining stars in all of baseball. In that time he was selected to each All Star game and had helped the Yankees win  five championship titles. Not to mention the 56 game hitting-streak in 1941. The war put his career on hold for 3 seasons, he left for war at the age of 27 and returned at the age of 31. When he did get back on the field he performed at an All Star level once again. He won the league MVP award in '47, in that same year he added another World Series ring to his collection.

After the stellar '48 season, DiMaggio was going to be 34-years-old, the team came him with an offer of $75,000, which was a raise of $10,000. Joe turned down the initial offer and would have to meet with the GM a few times before a mutual agreement was reached. If it was looked at from a purely statistical side, DiMaggio did not live up to expectations in '49 as injuries hampered him and even though the Yankees won the World Series, Joe hit just .111 in the Fall Classic. Unfortunately, it was something that he could not avoid. The Yankees brass had faith in him and inked him to another $100,000 deal not only in 1950 but 1950 as well. It came at a time when his career was coming to a close, his best days were behind him, however, he was reaping the rewards of those days that had passed. He had become a larger than life figure that brought the fans to the stands in Yankee Stadium and everywhere else he played as well. The 1951 season proved to be the swan song for Joe as Father Time knocked and he answered. He had made 13 All Star appearances and won 9 World Series titles, along with a long list of other accomplishments that earned him a spot in Cooperstown. According to Baseballreference.com, DiMaggio made just over $632,000 in his career, today that would equal $7.3 million. Just think, some backup players can make $7 million for one year these days. It's pretty astounding.