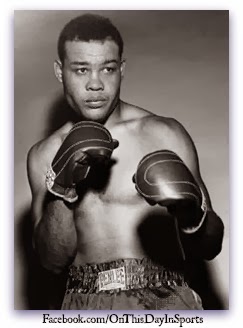 On February 17, 1941, with 15,903 on hand at Convention Hall in Philadelphia, the Brown Bomber Joe Louis successfully defended his title for a 14th consecutive time with a 2nd round knockout of Gus Dorazio.

In the weeks leading up to the fight, Dorazio claimed that he was confident that he could take down the boxer that no one else could seem to beat. He was wrong. Although, he did look like a formidable contender as he bobbed and weaved his way though the first round while landing a couple of blows to Louis' stomach. An overconfident Dorazio came to his corner between the rounds and told his trainer Jimmy Wilson "This guy ain't so tough. He's a sucker for a hook. I'm going out and stiffen him." The trainer tried to reel his fighter back in a bit, and advised that he stay down for a few rounds to see how things go. "But then the bell rang" explained Wilson later. "When I saw Gus stand erect, I knew it was over." And right he was. 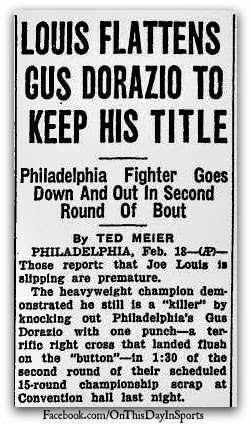 In the second round Dorazio attempted to come out of his crouch and land a left hook. Louis countered with a solid left of his own to the face of his competitor. In what was a brief moment of stunned indecision Dorazio stood erect, and Louis landed the punch that ended the fight. It was a lethal right that didn't travel more than six inches, but it did catch Dorazio right on the chin, and sent him falling face first into the canvas. That punch that sent Dorazio sprawling across the canvas came 1 minute and 30 seconds into the second round. It had him so dazed that when he was sitting in his dressing room he kept mumbling "they shouldn't have stopped the fight" as if he didn't even realize that he had been knocked out. When Louis was asked about Dorazio's effort he said "at least he tried."

Dorazio was one of a long list of victims that joined the Bum of the Month Club. It was a club that was reserved for whichever bum attempted to beat the champ. From January of '39 to May of '41, Louis successfully defended his title 13 times. No boxer since the bare-knuckle era had defended his title as frequently as Louis had which earned his competitors the nickname Bum of the Month. He was simply an unstoppable force.

If you would like to read more about the Bum of the Month Club take a look at this:
http://www.eastsideboxing.com/weblog/news.php?p=12459&more=1