On February 9, 1988, 22-year-old Pittsburgh Penguins standout, Mario Lemieux led the Wales Conference to a 6-5 All Star game victory over the Campbell Conference, with a 3 goal and 3 assist performance, in front of a packed house at The Arena in St. Louis. The six-point performance is a still standing NHL All Star game record. 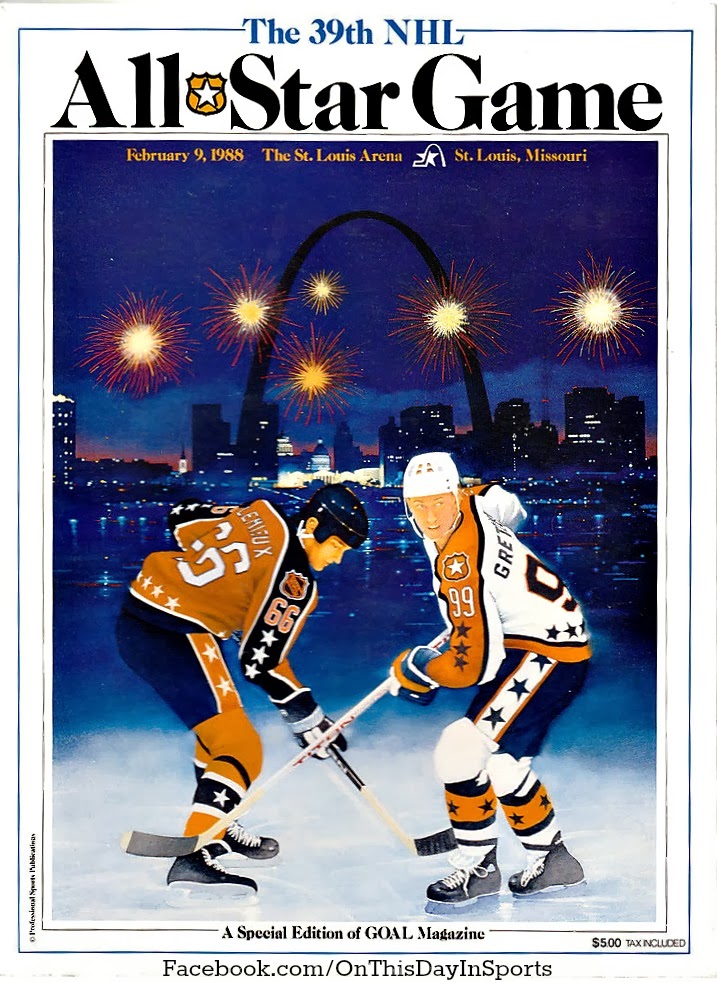 The Campbell conference got the scoring started with a goal from Dale Hawerchuk of the Winnipeg Jets just 3 minutes and 25 seconds into the contest.  New York Rangers right winger Tomas Sandstrom scored the equalizer with a goal that was assisted by Lemieux at the 14: 45 mark, only to watch Wayne Gretzky put the Campbell back in front minutes later.

In the second Lemieux was busy setting up his teammates as he picked up assists on goals by Mike Gartner and Peter Stastny that gave the Wales squad a 3-2 lead. Then the goal scoring started for Lemieux. His first of the night extended the lead to 4-2, it came 11 minutes and 34 seconds into the second period.  The wraparound shot had the coach of the opposing squad Glen Sather beside himself when he was asked about it later. The coach who normally guided Gretzky's Oilers during the regular season said "There isn't a player in the world who could have scored a goal like that." Luc Robitaille of the L.A. Kings added a goal to the Campbell side of the scoreboard before the end of the frame which simply set up for an exciting finish.

Denis Savard of the Chicago Blackhawks tied the game a little more than five minutes into the third. Those that were cheering for the Wales side didn't have to wait long to see Lemieux put his team back on top as he notched his second goal of the game at the 8 minutes and 7 second mark. The Wales held the lead until Robitaille struck again with a game-tying goal with just 3 minutes and 32 seconds left in the third. Both goalies fended off what was thrown at them and overtime would have to be the decider.

Lemieux capped things off with the game winner 1 minute and 8 seconds into the overtime period. It was  a backhander that was setup Mats Naslund of the Montreal Canadiens. Naslund assisted on all three of Lemieux's goals. Naslund also picked up assists on two of the first three goals and had a 5 point night of his own. Lemieux's 6 point night shattered the previous record of four that had been held by Gretzky, Ted Lindsay, Gordie Howe, Pete Mahovlich, Don Maloney, and Ray Bourque. At the end of the night, the young star seemed hardly impressed by his accomplishments. He said "I just got lucky tonight. I was in the right place at the right time Mats Naslund set me up perfectly."  He might have called himself lucky, but he was much more than that, as he established a record, and etched his name in the history books.

Posted by Wade Forrester at 2:38 AM