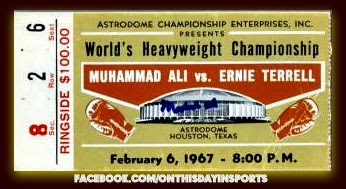 On February 6, 1967, in a battle of heavyweights, at the Astrodome in Houston, Muhammad Ali retained his title by taking down Ernie Terrell with a unanimous 15-round decision. The two had been scheduled to fight at the Astrodome in March of '66, but Ali's refusal to serve in Vietnam sidetracked the champ's plans. He would have to put the Terrell fight on hold while the legalities of the refusal to serve panned out. In the meantime, he fought in Europe and Canada. With his political troubles in the rearview mirror, Ali returned to American soil where he beat Cleveland Williams with a dominating 3-round TKO. Next man up. Ernie Terrell.

The blood boiled hot before it even began. In late December of '66, Ali and Terrell met in front of some television cameras for an interview with Howard Cosell. The interview rapidly headed south when Terrell referred to Ali as Cassius Clay. It was the name that Ali had abandoned when he turn to his Muslim faith in religion. He considered it to be his slave name and took it as a great insult. I will include a link to the video below, because I don't believe words can do it justice with how infuriated Ali looked as the situation escalated. He promised to punish Terrell as he called him an Uncle Tom. Some thought it was just another over the top Ali stage show, but the disrespect that he felt he had taken was far beyond a publicity stunt which is something Terrell learned by the end of the 15 rounds in which they would battle.

From the beginning it looked like Terrell might put up a good fight, he landed some key left jabs in the first round, then held his own in the second before the tables turned. The Associated Press scored the fight with Terrell only winning the second round. In the fourth round Ali did damage to Terrell's right eye that closed it to a slit. He was bleeding above it and Ali was in clear control. Terrell's trainer and staff were able to get the bleeding under control, albeit temporarily as Ali reopened the wound in the seventh and it continued to bleed until the final bell rang. 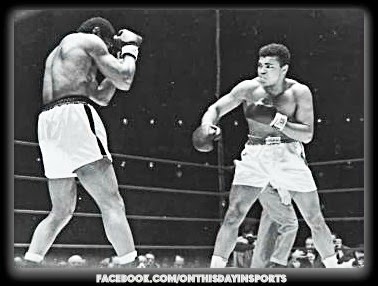 In the eighth and ninth Ali taunted his opponent as he yelled "What's my name?" over and over again. When Terrell would Cassius Clay, Ali would unleash another blow that would lead to defeat. Terrell was bloody and bruised when it came to an end, but he never did go down. The evidence of battle was very easy to see when it came to Terrell. On the other side of the ring stood Ali, without a mark on him. It dominant show of force for the 25-year-old Ali, and it was his 28th victory in a row. He had not suffered a loss up to that point in his career. Looking back on it now, it might have been much wiser to not poke the bear. When Terrell poked the bear, the bear attacked.

This link is a great highlight reel that features the interview with Cosell, as well as a followup interview. If you wanted to view the heated interview go to the 1 minute and 58 second mark. Otherwise, the whole thing is well worth watching. https://www.youtube.com/watch?v=HMiSX8M3U2s
Posted by Wade Forrester at 12:31 AM