February 1, 1914: The White Sox And Giants Stop In Egypt To Play Some Ball 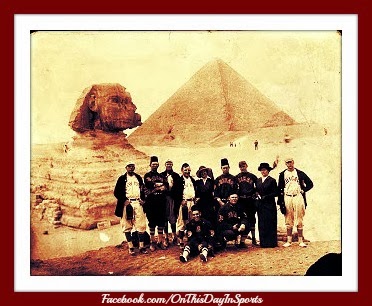 On February 1, 1914, with the Great Pyramid as a backdrop, the Chicago White Sox and New York Giants played to a 3-3 tie in an exhibition game in Egypt. The stop in Egypt was a part of a world tour that had been thought up by White Sox owner Charles Comiskey and Giants Manager John McGraw. The tour took 4 months to complete as the teams traveled from port to port by ship all around the world, beginning in Japan and ending in England. The tour would come to an abrupt end when World War I broke out, but more than 70 games were played before that happened and a wide variety of people from all over the world had gotten their first taste of the game that is played on a diamond.

The tour began in October of 1913 in Cincinnati where the teams would embark on a coast-to-coast trip that saw them play 32 teams in 33 days. The North American tour ended in Seattle on November 19th where a ship was boarded that was headed to Land of the Rising Sun. The voyage was much rougher than expected, which led to a late arrival in Yokohama on December 6th. They were four days late, but they were ready to play some ball. After the stop in Japan they moved onto China, the Philippines, Australia, New Zealand, Egypt and all across Europe before wrapping things up in England.

Along the way they played in front of heads of state and royalty as they spread the game that is played on a diamond. While in Egypt, the teams played in front of Abas Hilmi II, the Khedive of Egypt. The Khedive brought his 43 wives and staff of at least 100 to view the game. While they were playing in front of him the White Sox squad turned a triple play. With this being a new game that he had never seen before, the Khedive seemed to hardly notice the play that was such a rarity in the game. That caught the attention of future Hall of Famer Tip O'Neill. When stunned O'Neill mentioned it to Comiskey, his boss told him "He's got enough to do. If you had 43 wives to watch you wouldn't notice a triple play either!"

As the teams continued their journey they would play in front of Pope in Italy and the King of England before it all came to an end. In most cities they would square off against each other, however, there were exceptions as teams were assembled by locals in Japan, Australia, and the Philippines. With the headlines turning to war, the teams boarded a ship for the United States on February 27, 1914. They were greeted in New York on March 6th with several new tales to tell as they had traveled the earth playing the game that they loved.

Besides O'Neill there were a handful of other future Hall of Famers which included: Christy Mathewson, Sam Crawford, Tris Speaker, and Red Faber. Faber was loaned to the Giants during the tour, then went onto forge his Hall of Fame career with the White Sox.


The information about this tour was very limited. That tends to happen with events that are dated such as the tour. I usually look through a wide variety of newspapers and other publications, gather some facts, then write the story. This was a challenge since the story of the games were exactly hitting the newspapers the next day. Some of the numbers such as the 32 games in 33 days might be a give or take a few on either end of those figures. I only came across a few decent articles that were from 1913 or 1914. This article was used as a primary reference point: http://tinyurl.com/m7d74cb it is a story about the return of the teams that was done on March 6, 1914, by the Lewiston Evening Journal out of Maine. The story about the triple play was found in a book called Then Ozzie Said to Harold... The Best Chicago White Sox Stories Ever Told. Another book that I purchased while writing this is called The Tour To End All Tours: The Story Of Major League Baseball's 1913-1914 World Tour. From what I have read online the book has gotten a lot of praise for the research done and I know I can't wait to jump into it. You can find it on Amazon and a variety of other sites  that are very reasonably priced.

Posted by Wade Forrester at 1:16 AM