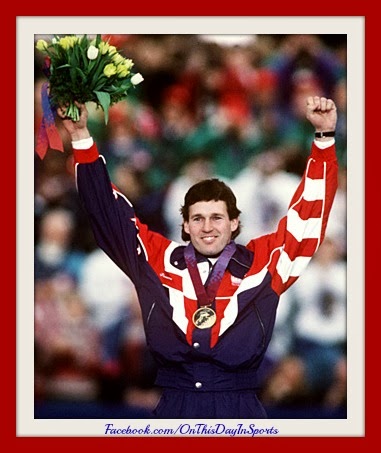 On February 18, 1994, years of frustration and heartache came to an end when American speed skater Dan Jansen took the Gold Medal in the 1,000 meter event at the Olympic Games in Norway. Jansen had found great success on the international stage, but when it came to the Olympics hijinx and tragedy would lead to great disappointment. That all changed in 1994 as he broke through to win the Gold in a record setting fashion. Jansen dedicated the Gold Medal effort to his sister who had passed away in 1988 after battling leukemia. His story is one that is full of triumph and tragedy that won over the hearts of many as they watched in him prevail in those '94 games.

At the '84 games in Sarajevo, he missed out on a Bronze medal by .16 of a second. It was disappointing, but nowhere near the tragedy he and his family had to endure in '88. Jansen was in Calgary with hopes of a medal in his mind once again. In the early hours of the morning he received a phone call from his brother in Wisconsin telling him that his 27-year-old sister Jane was losing her fight with leukemia. Three hours after that phone call he found out her fight had ended. A distraught Jansen did everything in his power to focus on the race, but just couldn't do it. Paired inside Japan's Yasushi Kuroiwa, Jansen false started once, then got a bad jump out of the gate. He was able to overtake his competitor in the front stretch, but lost his footing in the first turn, fell to the ice, then crashed into the padding. As Jansen fell his competitor tried to avoid him, but was unable to do so and crashed as well. Four days later, Jansen fell again during the 1,000 meter event. Jansen left those games with a heavy heart as he headed home to bury his sister. At the '92 games in Spain, Jansen came up short once again. He botched a turn in the 500 and came in fourth, then finished 26th in the 1000 meter.

Jansen came into the '94 games hoping to change his fortune. Things didn't go his way in the 500 meter as he slipped during the competition and came in a disappointing eighth place. When the 1,000 meter event came up four days later, Jansen knew this was his last chance at winning a medal. He left it all on the table, and skated the race of a lifetime. With  a great start out of the gate he led by six-tenths of a second at the 600 meter mark. With the crowd cheering him on, Jansen continued on his path to Gold. The crowd gasped as he swayed a bit going into the second to last turn, then struggled through the last turn. But his stride kept him in front and he crossed the line .58 seconds better than his competitor. With tears of joy streaming down his face, Jansen skated a victory lap with his one-year-old daughter Jane. He had been through a valley, and he had climbed a mountain. Dan Jansen became an Olympic hero, and it went well beyond what he did as a sportsman. He showed that there are times in life that we will get knocked down, and in those times the only thing we can do is get back up. I believe one of the most important lessons in life is to not let things defeat you. The resilience that Dan Jansen showed is something that lies within all of us. It is something to remember when life might be knocking you down. Get back up. You will succeed.

This is a great video from the team USA Youtube channel. It is titled: Gold Medal Moments: Dan Jansen -- Heartbreak: https://www.youtube.com/watch?v=wPYiMekC6jk
Posted by Wade Forrester at 2:14 AM